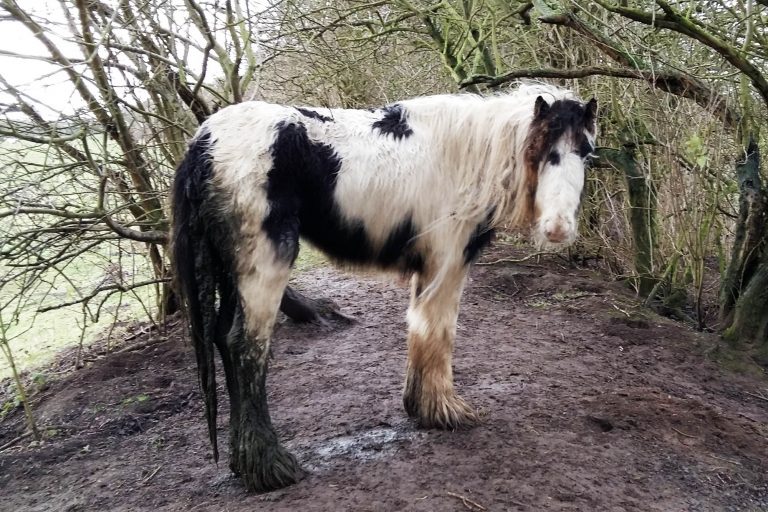 I started at World Horse Welfare in December 2018 and had a week’s handover with my predecessor, David. He introduced me to my area and gave me a vital heads-up on any potential problem spots.

Early in January I met two of my new colleagues to travel to a multi-organisation job together and was introduced to a lot of the other Field Officers at the briefing. The following day we were helping to rescue unhandled ponies, together with teams from other charities.

It was great to be included in the team and meet everyone so quickly. My formal induction came a week later and was rather less physically demanding!

Back in my own area, I soon found I was spending a lot of time communicating with my equivalent at other charities. The first time I had to work with them was on a job involving a group of ponies fly-grazing on the bank of a river. One pony was dead already and another was emaciated and very wobbly. She was removed to safety but sadly didn’t make it.

Only a week later I saw the opposite problem, just a few miles down the road: an obese pony suffering from hugely overgrown feet and laminitis. She was removed to safety and we are holding out more hope for her. Unfortunately, too often people don’t realise that obesity is far more dangerous than a horse being a little bit underweight.

One thing that has surprised me is the huge numbers in the groups I’ve come across. Working in Greater Manchester area previously I saw plenty of horses, but a big group was 10-15. Now it’s not uncommon to see groups of 50-80, which is obviously the result of the huge overbreeding problem.

It’s been a busy first four months as a World Horse Welfare Field Officer, so we shall see what the next four months brings!

At just £58 per year, this plan can help give you peace of mind. Join Today

When does use become abuse with horses? World-class gathering tackle complex question

Trying to identify and define where use of horses becomes abuse was explored at World Horse Welfare's 25th conference.

A recently published report on equine Quality of Life (QoL) was supported by World Horse Welfare.