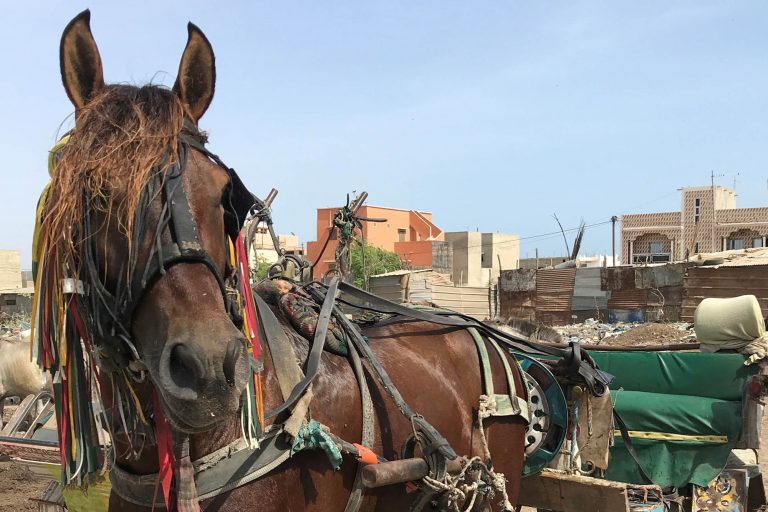 World Horse Welfare has been working with communities in Senegal for four years now and so I proposed a research project to analyse the impact of this on the welfare of local equines. My project would compare the situation in the areas the charity had been working in with that in areas not yet reached.

To collect the data, we used a questionnaire to provide an insight into the daily routine and management of the horse, plus an assessment sheet with a system to score the animal on their demeanour, body condition, lameness, wounds, foot soreness and general welfare.

We visited market places and working sites to witness the owner-horse interaction (feeling a bit like the Horse Police!). We tallied up the number of good and bad welfare situations we saw during 15-minute periods and the results were fascinating.

The study showed an overwhelming difference in the areas around the World Horse Welfare projects. There was a 72% average of good welfare situations in those areas, compared to 7% in other locations.

It was also great to see that advice on horse care and management had been taken on board in the communities near the World Horse Welfare projects, with horses having a rest area scraped clear of rubbish. In contrast, horses in other locations often had access to rubbish whilst resting, which can cause colic if they ingest it.

During our research, we found that owners in the areas which hadn’t taken part in a World Horse Welfare community project were keen to become involved in a scheme with the charity in the future, which was a really positive sign. We also found that the owners who had participated in a community workshop were very positive about the experience and fully appreciated the impact of their improved knowledge on how to best care for their horses.

Overall, the analysis showed that the working horses whose owners had taken part in one of the charity’s projects were stronger, better cared for and much more likely to be sound. They scored much better on the assessment overall, which was great to see as a clear indication of the positive impact of the World Horse Welfare project on equine welfare in Senegal.

At just £58 per year, this plan can help give you peace of mind. Join Today

A little dappled grey pony with a big personality has begun his new life with popular vlogger This Esme in style.