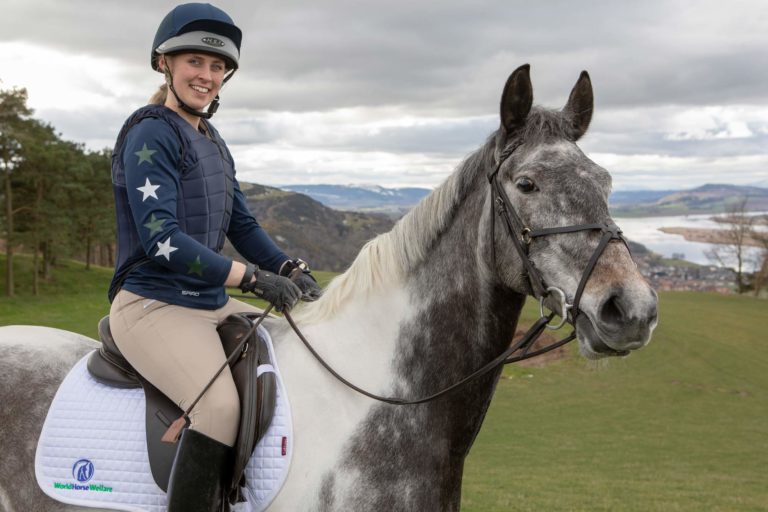 Montrose-based artist and tattooist, Judi Milne, is once again turning her creative talents to support charity, World Horse Welfare, by painting a sculpture for the 2019 World Horse Trail which will be on display at the Royal Windsor Horse Show.

World Horse Welfare’s ‘World Horse Trail’ will feature forty sculptures all modelled on rescue horse Lucas who is now transformed and competes at a number of equestrian disciplines with his Fife-rehomer, Colleen Macrae. Acclaimed sculptor, Judy Boyt, travelled to Lucas’ home in Fife to ‘live sculpt’ a maquette of the young horse which was then scaled up to create a mould for the large fibreglass horses which make up the sculpture trails.

Judi Milne previously took part in World Horse Welfare’s Invisible Horse Trail at the Mitsubishi Motors Badminton Horse Trials in 2016. She painted one of sixteen sculptures in an intricate pattern to tell the story of rescue horse, May, which was then coloured in by visitors to the show and later auctioned to raise money for the charity.

This time around, Judi is once again painting the People’s Horse which will tell the story of Lucas. Her design is made up of horseshoe outlines submitted by members of the equestrian community and it will once again be completed at Windsor with the help of visitors to the stand colouring in the black and white pattern. Judi explains:

I was brought up with horses and have always tried to support World Horse Welfare in any way that I can, including rehoming a lovely pony, Maybe, in the past so when I was asked to get involved with the horse trail again I jumped at the chance. Working with World Horse Welfare and on a sculpture by the amazing Judy Boyt is an absolute dream come true.

Lucas is going to be the people’s horse so I wanted to ensure that the people and their horses were quite literally part of his design. I collected photos of horseshoes which were submitted on social media and used them to make up Lucas’ markings, painting his head as a true reflection of the real horse himself. The idea is that by the end of Royal Windsor, his coat pattern will be completely coloured in and he will represent horses from all over the world

The World Horse Trail will be made up of six sculpture trails, all featuring designs which tell the story of World Horse Welfare’s work through different horses. Each one will be designed by a host of artists, celebrities and personalities including Martin Clunes, Deborah Meaden, Sara Cox and Nick Skelton. A mini trail of the small 35cm high maquettes will be on display at each of the charity’s four Rescue and Rehoming Centres around the UK, including Belwade Farm in Aberdeenshire, throughout the summer months.

The People’s Horse is sponsored by Alpha Card Compact Media.

The fundraising challenge has proved incredibly popular with horses and riders of all ages around the country.

Organisers behind fund to help Ukrainian horses and their owners report an extraordinary response within the first week.