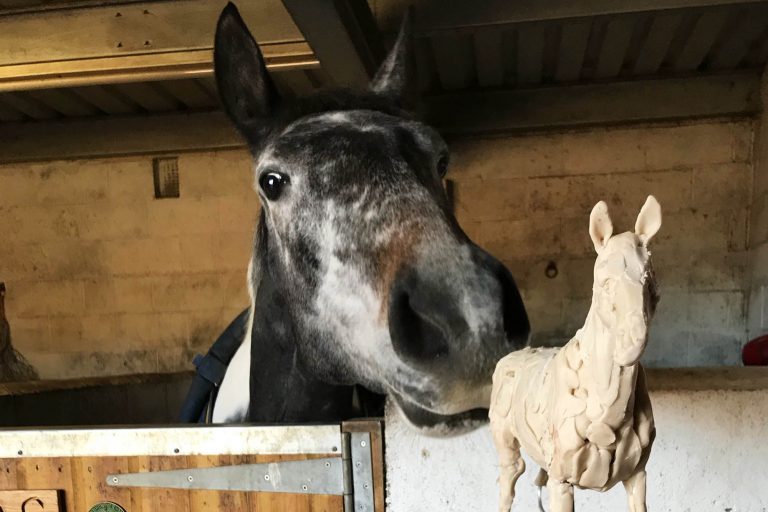 A Fife horse who was rescued at just ten months old from a freezing field with his emaciated mother and a group of other horses is the muse for the World Horse Sculpture Trail which will be displayed at a number of locations across the UK this year.

World Horse Welfare’s ‘World Horse Trail’ will feature forty sculptures all modelled on Lucas who is now transformed and competes at a number of equestrian disciplines with his Fife-based rehomer, Colleen Macrae. Acclaimed sculptor Judy Boyt travelled to Lucas’ home in Fife to ‘live sculpt’ a maquette of the young horse which was then scaled up to create a mould for the large fibreglass horses which make up the sculpture trails.

Twenty 11hh sculptures will make up two trails, the first of which will be on display around the towns of Windsor and Eton from mid-April, before moving to Kensington and Chelsea. The second trail will be showcased at the Royal Windsor Horse Show where World Horse Welfare is their supported charity for 2019 and where Lucas will also be travelling to compete in a showing class – flying the flag for rescue horses everywhere.

“It will be exciting (and a little daunting!)to see so many Lucases on the sculpture trails and it’s a real honour to have him representing World Horse Welfare. People are always amazed at the fact that he is a rescue horse so he’s a brilliant example of what these horses can achieve, proving they can go on and have an incredible life after a difficult start.”

“I’ve been asked if Lucas will let the fame go to this head but I’m not sure it will change the fact he spends about 90% of his time lying down, fast asleep! He’s often flat out and in dream world regardless of his surroundings, I’ve even plaited him up for a show whilst he’s flat out asleep! This however, is all redeemed every morning where he insists on sharing my mug of tea and demonstrates his true love of croissants!

“Competing at the Royal Windsor Horse Show will be exciting, if a little nerve-wracking, but I know that Lucas will do his best and that’s all I can ever ask for.”

The World Horse Trail will be made up of six sculpture trails, all featuring designs which tell the story of World Horse Welfare’s work through different horses. Each one will be designed by a host of artists, celebrities and personalities including Martin Clunes, Deborah Meaden, Sara Cox and Nick Skelton. A mini trail of the small 35cm high maquettes will be on display at each of the charity’s four Rescue and Rehoming Centres around the UK, including Belwade Farm in Aberdeenshire, throughout the summer months. Find out more about taking part in the trail

Lucas was discovered in the bitterly cold winter of 2013 with a small group of horses who appeared to have been abandoned and were struggling to survive with little food or shelter. Lucas was still feeding from his mother, India, who was not only emaciated but also carrying another foal too.

Thankfully they were all rescued just in time and taken to World Horse Welfare’s Hall Farm Rescue and Rehoming Centre where they received immediate veterinary attention. Lucas thrived in the charity’s care and little over a year later he was ready to be rehomed as a confident, healthy two year old to Colleen, moving to live in Fife and continue his education.

World Horse Welfare’s pilot scheme with Retraining of Racehorses (RoR) has reached a milestone as Wold’s Agent (Ollie), the first horse to join the scheme, has found a new home.