11 charities met Lord Randall on 24th June to call for the Government to increase sentences for animal cruelty. 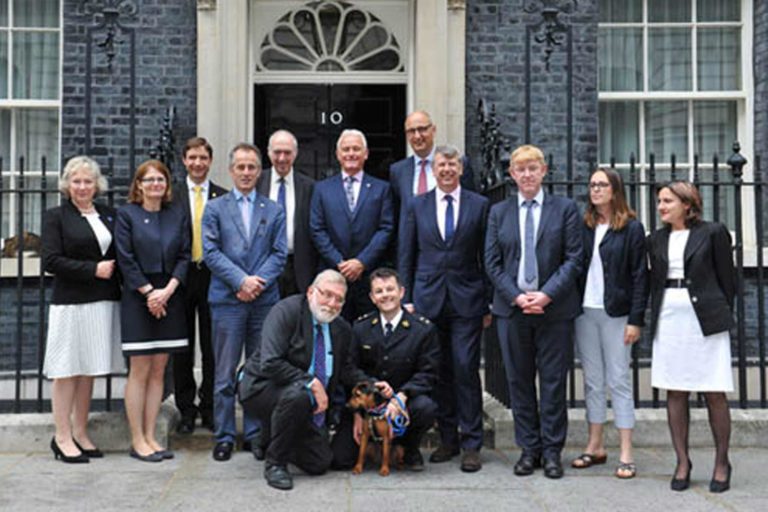 World Horse Welfare, along with ten other animal welfare charities, met with the prime minister’s environment adviser, Lord Randall, on the 24th June to call for the Government to increase prison sentences for animal cruelty. Joining them was Jet – a Lakeland Terrier shot in the head four times and left for dead by the ex-boyfriend of his previous owner.

“The majority of equine cases that are prosecuted do not meet the requirements for a prison sentence – those that do include cases where there has been a deliberate attempt to cause suffering or there is ill treatment in a commercial context. However, this pledge will give judges a greater range of options for cases which do meet the requirements for a prison sentence. We believe this will encourage tougher – and more proportionate – sentences to be given for serious animal cruelty offences and act as a proper deterrent to those who abuse horses.

“The Amersham case of 2009 remains one of the worst cases of equine cruelty seen, with over 100 animals suffering prolonged neglect and living in squalid conditions and 32 sadly found dead on the premises. The dealer responsible was sentenced to the maximum time allowed, 24 weeks in prison, and given a lifetime ban. The proposed change to the law would ensure that if an equivalent case was tried the sentence handed out could better reflect the seriousness of the crime.”

Environment Secretary Michael Gove first announced the Government’s intention to increase maximum prison sentences from six months to five years in September 2017. Despite promises and assurances by the Government to amend the Animal Welfare Act, and the policy being announced at two consecutive Conservative Party conferences, the change has yet to be made.

“It’s been more than 18 months since the Government pledged to increase penalties for the most serious cases of animal cruelty – and we’re still waiting for them to fulfil their promise.

“During that time, animals have been shot, stabbed, set on fire, drowned, beaten and left to starve to death. A maximum sentence of six months in prison for beating a dog to death with a shovel or throwing a cat off the roof of a building simply isn’t enough*. The courts need to have longer sentences at their disposal for the worst animal abusers – and they need these powers as soon as possible.”

The 11 organisations at the meeting in 10 Downing Street were represented by: