Violet was extremely thin, riddled with lice and heavily pregnant when she arrived at Hall Farm in March this year. 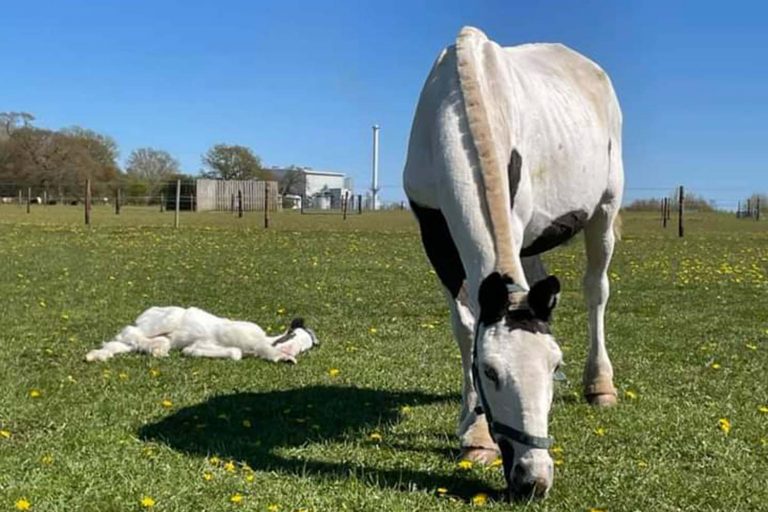 Despite her terrible condition on arrival, just three weeks later the little piebald mare produced a filly foal, who was later named Rose. It was obvious that even in her own emaciated state, Violet had given Rose everything she could during her pregnancy. Rose proved to be much stronger than might have been expected, given her mum’s poor condition, but she did need some additional support during her first few days.

Violet’s groom, Megan Jarvis said: “Every day you’d see a difference with Violet, she was gaining happiness and health, and gaining trust in human interaction. Violet was putting on weight and condition and we were waiting for her to drop her foal.”

As Megan was leaving one evening she noticed Violet’s behaviour and thought she was about to give birth. Continuing to watch the camera trained on the foaling box through the evening, Megan realised that Violet was struggling and was able to raise the alert. “If we didn’t have the camera, I don’t think Rose would have been here today” she said.

Thanks to the help of expert vets and our dedicated grooms who carried out checks every two hours throughout the night for the first few days, Rose picked up and she was soon strong enough to go out in the field with her mother for the first time. Violet has been slowly and carefully gaining weight, having had a tooth removed making chewing a lot easier for her. Throughout everything she has continued to be a fantastic mother to Rose, really showing her strength of character and determination. Rose has inherited this too, and is busy growing into a feisty, strong filly, who rapidly won the hearts of all the Hall Farm team who have been involved in the pair’s care.

World Horse Welfare Field Officer, Chris Shaw said: “It’s fantastic to see Violet recovering so well, given the terrible state she was in on arrival. The team have done a wonderful job nursing Rose through those precarious first few days and it’s incredible to see her going from strength to strength now. It’s safe to say that Violet’s life has been transformed since coming into our care – and the wonderful thing is that her foal, Rose, will only ever know love and kindness. Getting Violet and Rose to this stage has been a real team effort and that will continue until both are, hopefully, ready for rehoming.”

Each of our four stableyards has now reopened to the public and you can find out more about Sponsor a Stableyard HERE.