Social media pile ons, the power of opinion and evidence to effect change in the horse world and the need to show compassion when listening to others were just some of the ideas which arose 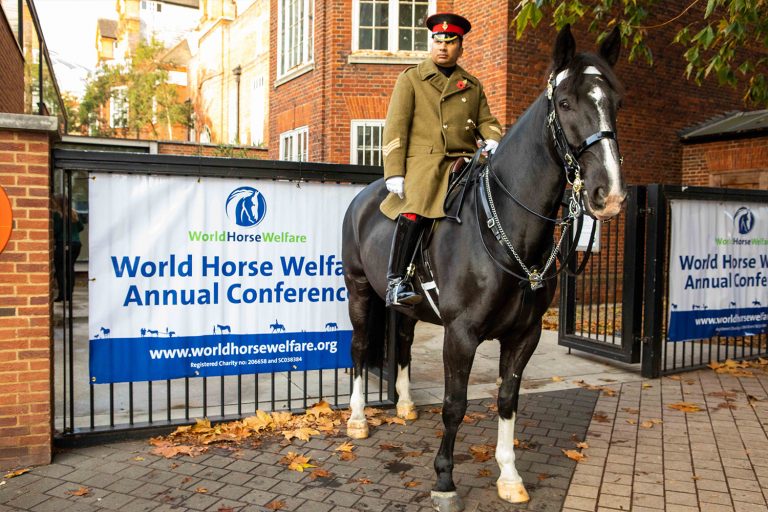 World Horse Welfare’s first truly hybrid conference was held at the Royal Geographical Society in London and broadcast virtually worldwide. For the first time the conference was broadcast with Spanish and French audio and the entire conference can be watched HERE, with a brief summary given below.

Roly Owers, Chief Executive, noted that there are two different definitions of ‘opinion’, one based on judgement and the other on knowledge, saying that World Horse Welfare encourages the latter. He emphasised that the opinion that matters most is one’s own. “So whose opinion matters? Without doubt it is your opinion because it constantly feeds your values and actions, and only you can do something with it. And if your opinion matters, you have a responsibility to have an informed one.”

Summing up the conference, HRH The Princess Royal drew parallels with World Horse Welfare’s founder and the ethos of the charity: “Ada Cole was a woman with strong opinions, but also a great ability to communicate and she used those opinions to influence positive change for horses. However, her opinions were backed up with hard evidence, which she needed to demonstrate the accuracy of her views to drive that change. Some things never change.”

Highlighting the importance of evidence in making decisions, Dr Monique Eloit, Director General of the World Organisation for Animal Health (OIE), said: “The OIE has developed an evidence-based approach that is central to the independence, mutuality and relevance of its outputs. The organisation’s reputation rests on the timeliness, quality and objectivity of the scientific evidence used for its own activities. The OIE must, and will, continue to provide analysis based on the best evidence available to maintain its credibility.”

International Dressage rider and trainer, Pammy Hutton, looked at the positive side of social media, referencing her success in bringing issues such as Rollkur, doping and tight nose bands to large audiences. In addition, social media has been integral to fundraising efforts. She said: “I don’t always get the balance right, but I will make a U-turn. Try and be informed and do research, but open to learning new things. Staying up to date is almost impossible, things move so quickly and it is about getting the balance right.”

ITV Racing Lead Presenter Ed Chamberlin started by saying everyone’s opinion matters but you can’t make everyone happy at all times. “Listen to as many opinions as possible and know your audience as best you can. We need to be proactive with education and information and that involves getting the realities out there, both positive and negative.”

He cautioned that: “Social media tends to reflect one end of the spectrum or the other – the very positive or the very negative. Remember that common sense and the middle road can get drowned out.”

Questions followed for Sky News Sports Editor Nick Powell; Leopoldo Stuardo, Scientific Coordinator – Animal Welfare, World Organisation for Animal Health (OIE) and Pammy Hutton. Nick said: “Social media is worth listening to but don’t be driven by it. Fact check and do your research. Being first is cool but being first and wrong is not cool.”

After the morning break, Jordan Headspeath, former groom at HM Highland Pony Stud and World Horse Welfare told a personal story on the dangers of social media, describing a video of one of her ponies walking through deep snow that went viral and generated many negative and abusive comments on social media from people who jumped to conclusions and called her out for cruelty. Jordan revealed the effect this had had on her: “The responses were shocking and really brought about self-doubt. Consider before you post and add context and background. If you are commenting on someone else’s post be careful what you say, be mindful that you are just looking at a moment in time and won’t have all the details.”

Following Jordan’s story, performance psychologist Charlie Unwin explored how to handle negative feedback. He pointed out that people tend to focus on the negative and can become preoccupied with things that we cannot control. He said: “Self-belief has a major role in how we deal with others’ opinions and dealing with negativity. We should not ignore the things we cannot control but accept them and develop a strategy to deal with them.”

A discussion panel consisting of Sara Cox (DJ, horse owner and World Horse Welfare Patron), Dr Neil Hudson MP, the only vet in the House of Commons; Dr Camie Heleski from the University of Kentucky Equine Science and Management programme; Mariano Hernandez-Gil equine professor at National Autonomous University of Mexico; and Chris Tufnell, practicing vet and World Horse Welfare Trustee considered a number of questions, including whether science could ever be disregarded, how people can be encouraged to seek accurate information and how equine welfare can be kept on the radar of politicians and the public. The conclusion to the last question was to do more of what is currently being done. One popular analogy was to break the Radio 4 ‘Just a minute’ rules – repetition is good, do not be afraid to deviate from what is currently on the agenda and don’t hesitate to bring an issue up!

Roly Owers ended the afternoon by saying: “Whose opinion matters? Your opinion matters because opinion influences the future. We mustn’t ignore the negative but turn it into a positive. And it’s how we speak to one another. Be compassionate and understanding, online or offline.”

As a final conclusion to the conference a word cloud was generated by asking the attendees ‘Whose Opinion Matters? The most dominant word was THE HORSE

On Thursday November 11th 2021 at 09:45 a stellar array of equestrian professionals and supporters - and World Horse Welfare's President Her Royal Highness The Princess Royal - come together live and consider ‘Whose Opinion Matters?’