World Horse Welfare’s pilot scheme with Retraining of Racehorses (RoR) has reached a milestone as Wold’s Agent (Ollie), the first horse to join the scheme, has found a new home. 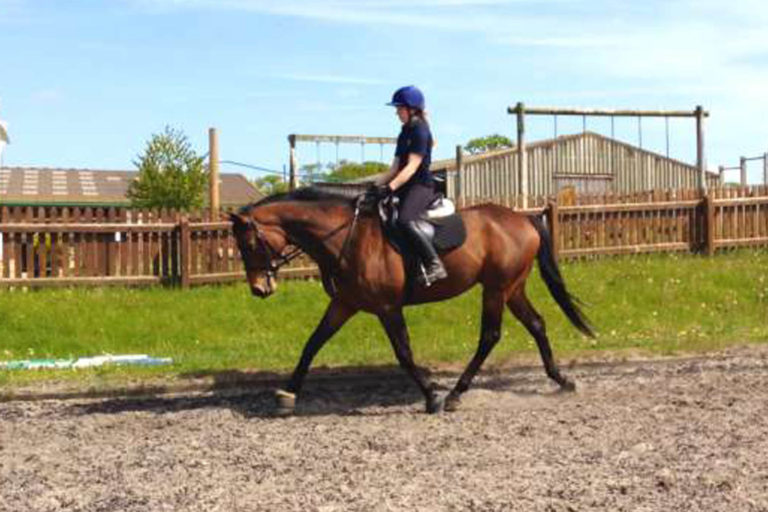 Ollie arrived at World Horse Welfare’s Hall Farm Rescue and Rehoming Centre in January this year to undergo rehabilitation with Emma. Ollie had a short racing career, running a total of five times before he was purchased by a lady who began his training outside of the racing world. Unfortunately, due to an injury she became unable to care for him and so he joined the World Horse Welfare ROR pilot scheme.

Following physiotherapy and pole work to develop and rebuild muscle tone, Ollie’s ridden work progressed quickly and after a few months he began to take part in low-level dressage competitions receiving high placings each time. Once he joined World Horse Welfare’s rehoming scheme, Ollie received a lot of interest from potential rehomers but Rossdales Equine Hospital secretary, Rachel Clay, turned out to be the perfect candidate.

“I have been riding for almost 30 years in a range of disciplines but since becoming a mother I have been taking things easy with just hacking and light hunting. Now the children are older I was keen to find a horse which would help me get back into competing and rehoming seemed like the ideal solution. Ollie has settled into his new home with us beautifully and it is clear that he has been impeccably schooled during his time at World Horse Welfare. I’m really excited for us to start our dressage career together!”

“Ollie’s successful rehoming is an important milestone in the RoR pilot scheme and we are delighted that he is going to a home where he will be able to build on his dressage success. We have also recently added Freddie, another of the horses from the scheme to our rehoming website and it’s encouraging to see him already receiving a number of applications.

“We are very pleased with the success of the pilot scheme so far.”

“Through the pilot scheme we are developing with World Horse Welfare, together with our existing network of retraining centres, we have in place a structure that enables former racehorses that might otherwise be at risk of becoming vulnerable to be looked after, retrained and rehomed.

“We are delighted that Ollie has been found a new home following his spell under the expert care of World Horse Welfare and we hope the pilot scheme will evolve into a longstanding alliance and working relationship.”

September 2015 is World Horse Welfare’s annual Rehome a Horse month which shines a light on the horses and ponies who are looking for homes but also showcases the stories of the 1,700 World Horse Welfare horses and ponies currently out in homes around the country from those competing at eventing, dressage, vaulting and showjumping to pleasure driving, hacking, side-saddle and those who provide faithful friendship to their rehomers and equine companions.