Piebald mare Maggie was found with open sores all over her body and was caring for both her own foal and an orphan. 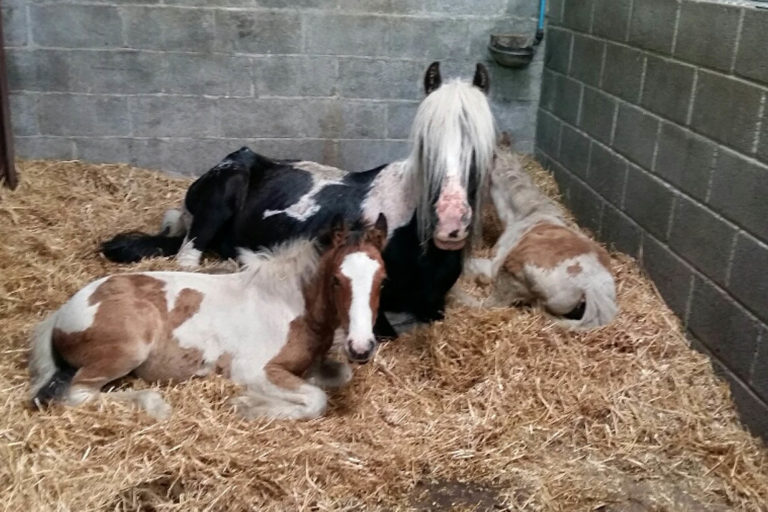 When piebald mare Maggie was discovered by a World Horse Welfare Field Officer she was in a terrible condition, dangerously underweight and covered in angry infected sores, with skin peeling off her back and face. Not only this, but she was also caring for her own seven month-old foal Rosie and orphan foal Jim.

It was clear that all three horses needed immediate attention so they were travelled to World Horse Welfare’s Glenda Spooner Farm Rescue and Rehoming Centre in Somerset where the team found Maggie’s wounds were much worse than expected and there were actually maggots living under the infected skin on her back.

“Maggie’s skin condition was probably the worst I’ve ever seen. The sores on her back and face were open and really red, her ribs and hip bones were clearly visible and despite all this she was still being an incredibly good mother by taking care of the two foals.

“Once Maggie’s skin condition began to clear up, we were then able to turn her out in the paddock with her two foals where they were all able to explore and relax, knowing that they were in the best of care. Sadly, after a couple of months Maggie’s condition started to deteriorate with her quickly becoming very ill and it was apparent there was something else wrong with her.

“After two or three days of nursing, Maggie was still very poorly with no signs of improvement so we had to make the heart wrenching decision to have Maggie put to sleep.

“Whilst we were all incredibly sad to lose this lovely mare, her legacy will live on in these two beautiful little foals. Maggie was an amazing mother, giving everything she could to both brave little foals and they are now thriving in our care.

“There are many more invisible horses out there just like Maggie, Rosie and Jim who are in need of our help and with the harsh winter weather setting in, we are likely to see an increase. World Horse Welfare relies entirely on voluntary donations and without our dedicated supporters; we would simply not be able to continue helping vulnerable horses and ponies to have a second chance.”

Throughout December World Horse Welfare will be sharing stories of rescue, hope and inspiration, showing just how vital our supporters’ donations are in helping our team to give horses the ultimate gift of care this Christmas.

Charities combine strength for the benefit of horse welfare

A bright future ahead for ponies rescued from sanctuary

137 horses and ponies have been rescued in a large multi-agency operation.