RSPCA and World Horse Welfare alerted after concerns were raised for three equines kept at a stable yard. 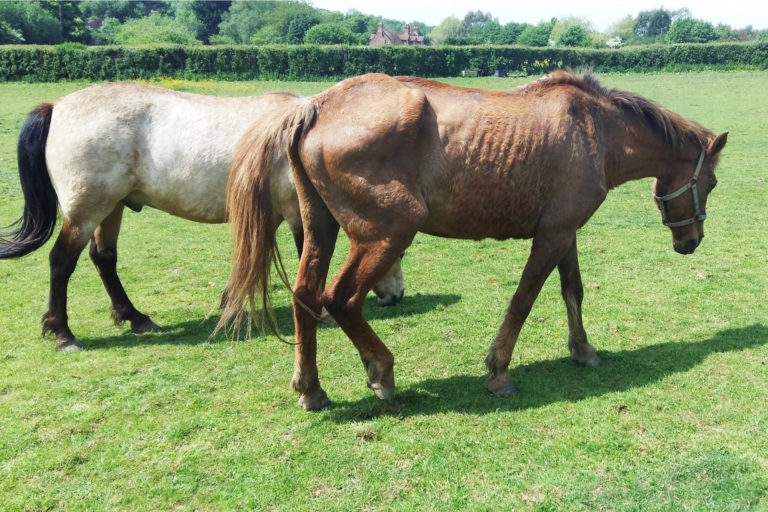 A Hampshire horse owner has been disqualified from keeping horses for five years, after a horse was found emaciated and two ponies had overgrown hooves.

The owner was found guilty of five charges in her absence in January 2019, and was sentenced at Southampton Magistrates’ Court on Tuesday (17 June.)

Officers from World Horse Welfare contacted the RSPCA in May 2018, after receiving calls of concern from members of the public about the welfare of three horses kept at stables in Hursley.

“Members of the public had been in touch because they were so concerned about the animals’ overgrown hooves, and one horse in particular looked skinny. They were worried that nobody seemed to them to be visiting the horses regularly and caring for them.

“When I arrived and saw the horses I was shocked at their condition. The hooves on two of the ponies were overgrown, and the horse named Inca was so thin his hip bones and ribs were clearly visible.”

“These horses had not received the care they needed for some time.  The contrast between the emaciated horses and the obese one was startling, but each is just as damaging, and it just goes to show that neglect can cause suffering in many forms. I am pleased that Woody and Paddy have been successfully brought back to health and are enjoying the lives they deserve in new homes.”

The owner was found guilty of failing to provide adequate care to the three horses – Paddy, Inca and Woody – and also causing unnecessary suffering to Inca. Along with a disqualification order on owning equines for five years, she was given a community order with 10 rehabilitation days and ordered to pay £750 costs by Magistrates.

The horses, named Inca, Paddy and Woody, were rehabilitated and found new homes. After spending a year in his loving new home at the National Animal Welfare Trust, sadly Inca has since passed away.