Equine obesity is an increasing but under-recognised welfare issue in the UK. 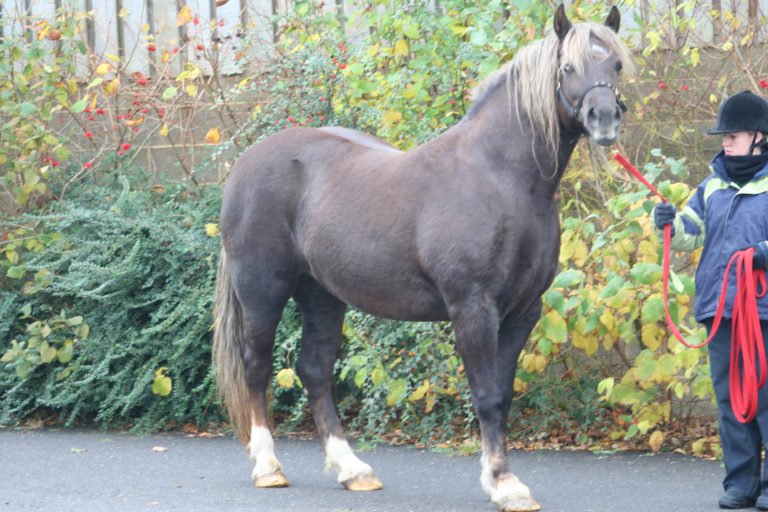 Research by the Animal Health Trust (AHT), which has been published in the Equine Veterinary Journal and funded by World Horse Welfare, shows that equine obesity is an increasing but under-recognised welfare issue in the UK.

Data collected from 785 horses and ponies (31% of which were classified as obese), over a two-year period between 2009 and 2011, has been used to explore various elements that contribute to the risk of obesity in British horses and ponies.

The research, funded by World Horse Welfare, has identified several factors which may increase the risk of being obese. Pony breeds, particularly UK native breeds and heavier horses such as draught and cobs types were all significantly more likely to be obese compared to Thoroughbred horses. The increased risk may be due to these native breeds having adapted to thrive in harsh environments with sparse grazing available.

Charlotte Robin, Research Assistant at the AHT and lead author of the paper, said:

“Native breeds may be genetically better adapted to survive in harsh conditions, having a so-called thrifty genotype, increasing their risk of obesity when maintained in an environment where food is of better quality and more readily available.”

Horses that were described by their owners as readily being able to gain weight or being “good doers” were more than three times more likely to be obese, compared to those that normally maintained weight.

“In humans, obesity is associated with poor health status and chronic health conditions including diabetes, hypertension, respiratory disease and arthritis. Similar associations between obesity and adverse health events have been described in equines.”

Similarly in humans, exercise significantly improves insulin sensitivity, and it is thought the same “dose-response” effect is mirrored in horses. For example, the AHT’s research highlights that the risk of obesity is greater in pleasure or non-ridden horses, with pleasure horses being more than twice as likely to be obese and non-ridden horses being nearly three times more likely to be obese. Competition animals will receive increased exercise at a higher intensity and be fitter than non-competition animals, further reducing the risk of obesity. Charlotte added:

“Competition horses are likely to be managed in different ways compared to non-competition or non-ridden animals and this may also contribute to the reduced risk of obesity within this sub-population.”

“Excess weight is one of the greatest challenges facing horse owners in the UK today, which is why we supported this vital research.  Being overweight can be just as much, if not more, of a health concern as being underweight.  In our experience it can take three times longer to get an overweight horse back to optimum condition than it can a thin horse. Moreover, a previously obese horse’s weight will need to be managed for the rest of its life, even after the weight has come off, and they are likely to suffer long-term effects.  Managing a horse prone to weight gain can be incredibly difficult and this is why our Right Weight project provides practical guidance for owners on how to assess and manage their own horse’s weight.”

One of the most common health conditions linked to equine obesity is laminitis, a painful and debilitating disease affecting the feet. A new AHT study, in collaboration with the Royal Veterinary College and funded by World Horse Welfare, is aiming to take a closer look at the management factors which may increase the risk of laminitis in the British equine population.

The study; CARE About Laminitis, launching in July 2014, will ask owners of laminitic and non-laminitic horses or ponies to complete monthly online diaries.

The AHT’s obesity research has helped to highlight obesity as a significant equine welfare issue and provided valuable information for owners. People frequently misclassify their own weight or body shape, and this phenomenon also applies to perceptions about our pets’ weight. Dog and horse owners have been demonstrated to underestimate their animals’ weight, suggesting the prevalence of obesity in this study is likely to be an underestimation. Charlotte explains:

“It is possible that in certain breeds, being overweight or obese has been normalised to a certain extent. Owners may find it easier to identify an overweight Thoroughbred, compared to an overweight cob or native pony.

“Helping owners identify when their horse is overweight or obese is an essential aspect of reducing the welfare impact of equine obesity.”

Who are the AHT?

The Animal Health Trust (AHT) is an independent charity, employing over 200 scientists, vets and support workers. It aims to improve the health and welfare of horses, dogs and cats through research. It also provides specialist referral services and continuous education to vets.

This research was conducted in conjunction with the Royal Veterinary College.
• The abstract of the research paper can be found here.
• This research and the CARE About Laminitis project are both generously funded by World Horse Welfare.
• World Horse Welfare launched the Right Weight project in 2007 to help raise awareness about, and help people to prevent, a growing threat to horses’ health: being overweight. The charity helps people to learn how to assess their horse’s condition and provides practical tips for weight loss and management.

Woman banned from keeping all animals for indefinite period

A woman has been disqualified from keeping all animals for an indefinite period after she failed to provide veterinary care for her lame horse.