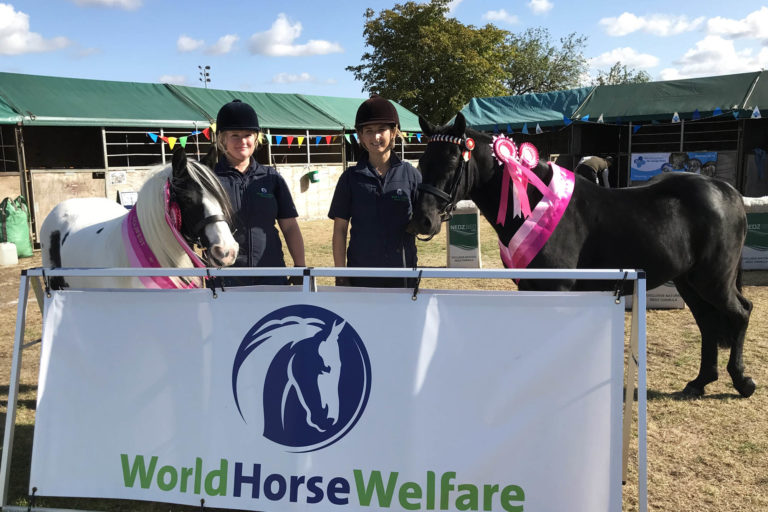 Ponies Buttercup and Fydlyn Kenen (Clyde) have been so successfully transformed since coming into the care of World Horse Welfare that they were awarded Champion and Reserve Champion Rescue Pony at Equifest this year – an incredible achievement given the ponies’ condition a year ago.

Equifest is the biggest rescue competition of the year and for the ponies to reach the final is in itself a huge achievement. A field of twelve deserving ponies qualified for the evening championship so to win was a triumph for all concerned.

Piebald mare Buttercup came into the charity’s care in June 2018 and is amongst the worst cases that staff at Penny Farm Rescue and Rehoming Centre had ever seen. She was severely emaciated and dehydrated, yet somehow still gave birth to a tiny filly foal.

“It’s incredible that Buttercup and her foal both survived, given the terrible condition that Buttercup was in. She needed urgent treatment and was far too weak to care for her foal herself, so the team had to hand-rear the foal, Frieda.

“It took months of dedicated care from the team to get Buttercup strong enough to even be turned out in the field, but she’s gone from strength to strength since then. She’s really blossomed this summer and loves attention, so we thought she should have a trip to Equifest to take part in the rescue classes. Seeing her win Rescue Pony Champion is incredible – a real testament to the team’s dedication and care over the last year.”

Black gelding Clyde came into the charity’s care in May 2018 after being found in a field, severely emaciated and with overgrown chipped feet.  He was covered in lice and had chunks of hair missing from his coat where he had tried to rub to ease the irritation. Clyde was very lethargic when he arrived, with sunken eyes and no real will to survive.  The team at Penny Farm worked hard to make him more comfortable, treating his skin condition and using a duvet under his stable rug so that his protruding bones didn’t rub and create sores.

“Clyde was in such a poor condition on arrival that it took weeks of dedicated care and attention before he started to become interested in his surroundings and really respond to treatment. He’s comes on in leaps and bounds since then and although he can still be a bit wary of new people his confidence is growing fast. He’s turned into a very handsome pony and we were really proud to show him off at Equifest.

“For Buttercup and Clyde to be transformed into showing champions in just over a year is a great tribute to the team’s hard work, given how poorly they were on arrival.  We’re very proud of both ponies and Buttercup is doing really well with learning to drive, so we hope that she will be ready to rehome very soon.”

You can see our horses and ponies who are currently looking for new homes here.