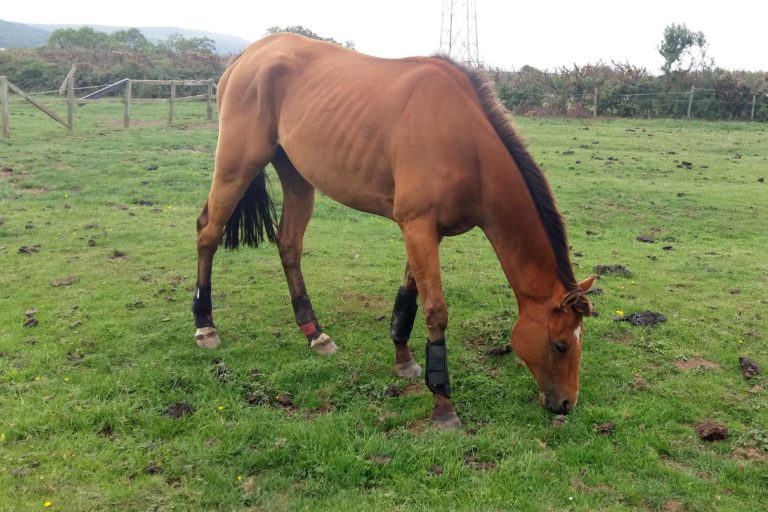 A horse owner pleaded guilty to five offences under the Animal Welfare Act 2006 at a hearing at Teesside Magistrates’ Court last month (27 February).

He was given an 18-week prison sentence suspended for 12 months and a 12-month community order including 20 rehabilitation activity requirement days. He was also ordered to pay £800 in costs and a £115 victim surcharge. He was disqualified from keeping all animals except dogs for ten years.

World Horse Welfare had previously received a call from a concerned member of the public and given advice to the owner about two horses in July but when our Field Officer re-visited found that the thoroughbred geldings had deteriorated and called the RSPCA as it was clear that further action was needed.

“The grey horse, Dimitri, had a wound to his right shoulder that was maggot-infested.

“His ribs, hips and spine were all visible but he was active and alert.

“The area he was in had very limited grazing, no hay or supplementary food and the water that was available to him was green.

Following vet advice the two horses were seized by police and both were taken into the care of World Horse Welfare. Dimitri was signed over on the day and Cliff at a later date. Sadly, it was discovered that Dimitri had fractured withers and he was put to sleep on vet advice. Cliff remains in our care at the moment as they continue to prepare him for rehoming.

“Wherever possible we will always try to work with horse owners to resolve problems in situ but unfortunately the owner ignored the advice and guidance given to him. Dimitri was clearly in need of urgent medical attention for his painful wound and both horses were in very poor condition – even though there was a barn full of hay at the premises.

“Thankfully, we were able to remove both Dimitri and Cliff to safety and give them both the dedicated care and veterinary treatment they needed. Dimitri was found to be suffering fractured withers which could not be treated so the difficult decision was made to put him to sleep but thankfully Cliff is flourishing in our care and will be looking for a new home soon.”

On 17 December, another RSPCA inspector attended the address after concerns were raised for a collapsed horse at the location.

“A chestnut gelding called Jango was found down and gasping for breath when the inspector arrived.

“He was very thin and his ribs, hips and spine were all visible.

“He had a bandage on his front foreleg, and when the bandage was removed there was a wound which was very smelly, soft to touch and was oozing with pus. He also had numerous patches of rain scald that were red in colour. The owner said the horse had become ill quickly and he was planning to get a vet out to him.

“Jango was seen by a vet at the scene and they advised that he should be put to sleep to prevent him suffering any further.”

A five year old chestnut gelding horse called Tizer was in another stable at the site. He was also thin with his spine and hips visible. He and two other horses – who there were no welfare concerns regarding – were signed over to the RSPCA and removed. They remain in RSPCA care whilst they are being prepared for rehoming. A further horse was signed over at sentencing who is being assessed.

In mitigation, the court heard that someone else owned the animals but no evidence of this could be found.