Christine Kelly disqualified from keeping animals for life after being convicted of 15 offences. 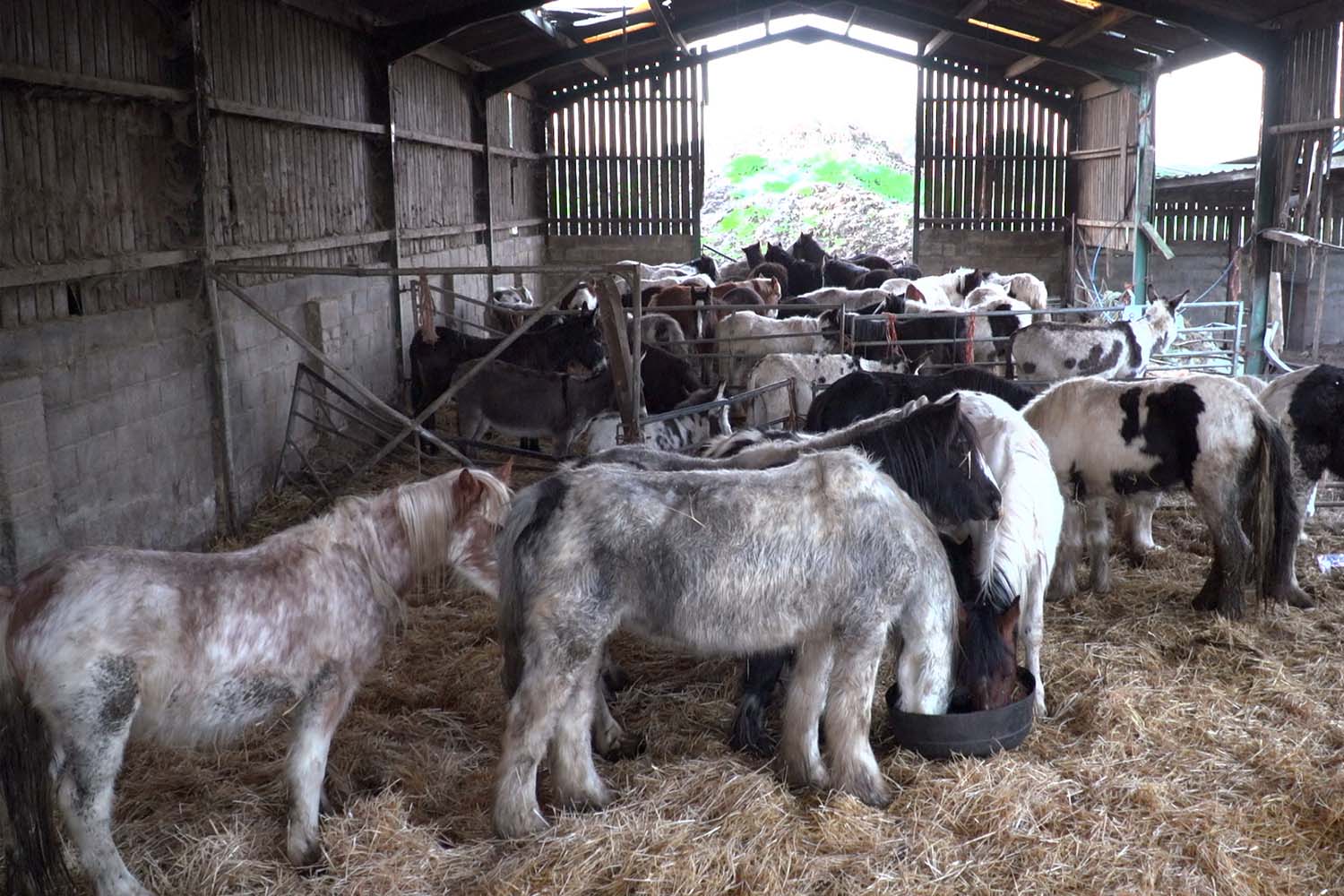 A woman has been given a suspended sentence after more than 200 animals were removed by charities from a Surrey farm. Christine June Kelly was found guilty of 15 offences under the Animal Welfare Act after a trial over dates in June and August this year. The charges relate to more than 130 horses, as well as dogs, donkeys, poultry, and goats, although she claimed throughout the investigation that she was not responsible for all of the animals who were found on-site.

Surrey Police executed a warrant at a farm in Ripley, Surrey, on 9 January 2019 as part of an RSPCA-led investigation into concerns for the welfare of horses at the site. Guildford Borough Council, Bucks and Surrey Trading Standards, World Horse Welfare, Bransby Horses, Redwings, The Horse Trust, The Donkey Sanctuary, Dogs Trust and a number of vets assisted on the day. Rescuers discovered horses, dogs and farm animals living in poor conditions.

Huge herds of ponies, many riddled with worms, were living out in fields with hazardous metal and broken fencing sticking up from the thick mud. Inside two barns were pens full of donkeys, goats and ponies; many of them standing on top of 2ft-3ft of months worth of waste and faeces. Many were skinny and had untreated health conditions.

A total of 204 animals were discovered at the site. While three – two horses and one goat – were sadly put to sleep at the scene, the rest (201) were taken into charity care, including 129 horses and donkeys, 59 dogs, three alpacas, five goats, four chickens and one duck. Some of the sickest animals received immediate veterinary care while others were taken for treatment nearby, and those that were considered fit to travel by on-site vets were transferred to World Horse Welfare and other organisations for care and rehabilitation.

Despite urgent veterinary treatment – including from vets at one of the country’s leading equine hospitals – sadly 14 horses who were weak, emaciated, had serious worm burdens and were suffering from cyathostominosis died or were put to sleep on veterinary advice.

Kelly was found guilty of failing to meet the needs of 131 equines by failing to provide a suitable environment, a water supply, adequate nutrition, routine dental or farrier care, or adequate parasitic treatment or control and treatment for prevention of illness and disease. She was also convicted of causing unnecessary suffering to a number of horses, dogs and goats.

“A number of complaints about the farm had been filed with the RSPCA and World Horse Welfare and, following weeks of planning and gathering evidence, Surrey Police were able to execute a warrant. More than 100 people from different agencies spent more than 12 hours assessing the animals, rounding them up and moving them to vets and rescue centres. It’s one of the biggest animal welfare operations ever in the UK.”

Christine Kelly claimed she only owned dogs and that she took care of six horses on behalf of her grandchildren. But, in August, a district judge found her guilty of 15 offences: five under Section 9 – for failing to meet the needs of a number of animals at the farm – and 10 under Section 4; for causing unnecessary suffering.

Kelly appeared at Staines Magistrates’ Court on Thursday (25 August) to be sentenced. She was handed a 26-week prison sentence – suspended for 18 months – as well as being disqualified from keeping all animals for life.

A deprivation order – relating to 12 dogs and seven horses – was also issued, meaning the charities can now rehome them. All other animals had previously been signed over for care by the charities or to be rehomed.

“This was a particularly long-running and complex situation but, as access to the site had been refused, no-one knew exactly what to expect. The large number of animals involved and the state they were being kept in was shocking to the officers attending but all the agencies involved worked together incredibly well and were able to pool resources and concentrate on their areas of expertise, meaning that animals could be taken off site quickly and start receiving proper care.

“World Horse Welfare was able to take 45 of the horses and many have now been rehabilitated and found loving new homes through our rehoming programme. Due to the protracted timescale of this prosecution, however, they had been at our centres for almost two years before we could ready them for rehoming. Now that the case is finally over, the future is brighter for the animals involved.”

‘Once in a generation’ opportunity to protect animals

50 Animal charities unite to urge Government not to waste ‘once in a generation’ opportunity to protect animals.