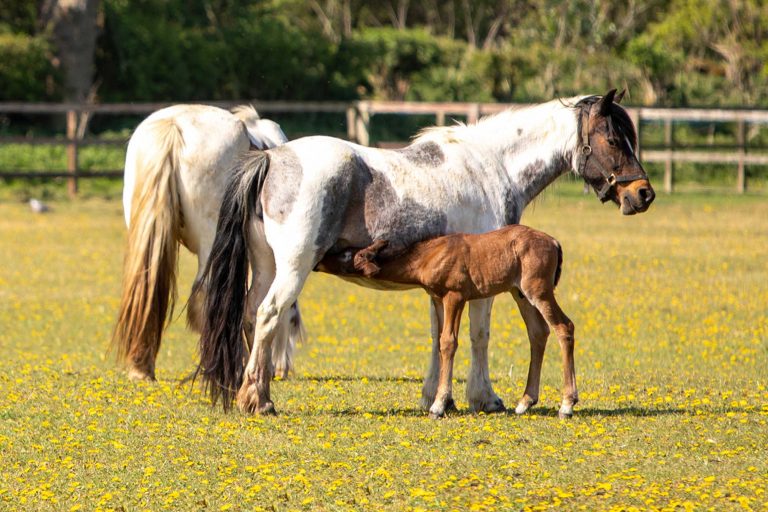 Staff and grooms at World Horse Welfare’s Hall Farm Rescue and Rehoming Centre were delighted to be met, on the morning of Tuesday 21st April, by a new addition to the team! Mare Winona had given birth overnight to a gorgeous colt foal who was bright and healthy and immediately captured the hearts of everyone at Hall Farm. A social media competition to name the foal was won by the name ‘Captain Tom’ after Captain Tom Moore, a 100-year old World War 2 veteran who recently raised a staggering £28million for the NHS after walking 100 laps of his garden, aided by his walking frame.

Sue Hodgkins, Manager of Hall Farm Rescue and Rehabilitation Centre was asked why Captain Tom had been chosen out of all the names suggested in the online competition. She said:

“We decided to pick ‘Captain Tom’ to name the foal after the inspiring Captain Tom Moore because he shares some of the qualities we feel our welfares also have to possess in order to survive the ordeals they go through before coming into World Horse Welfare. They have to be resilient, stoic, determined, positive, selfless – which certainly applies to our mares who come into the farm in foal or with foals at foot – and forgiving.

As Captain Tom grows, his name will also help to remind us of how we all adapted and coped during this lockdown and that Winona produced this bundle of joy at such a strange time.”

Everyone at Hall Farm is looking forward to watching Captain Tom grow and develop and hoping that it will not be long before the centre can reopen to the public so that everyone can come and meet him.

Captain Tom’s mother, Winona, had come into World Horse Welfare’s care in December 2019 as part of a welfare case, and had another foal at foot at the time as well as already being in foal again. Both Captain Tom and the previous foal, Wilfred, will be cared for by the charity until they are old enough and ready to be rehomed. Hall Farm and the charity’s other three Rescue and Rehabilitation Centres around the country are currently full to capacity, but many of the mares coming in as welfare cases are pregnant, meaning the number of animals the charity have to care for continues to increase.

With all four of our Rescue and Rehoming Centres currently at record stocking levels, rehoming is more important than ever – if you could offer one of our horses or ponies a loving new home, check out our horses who are ready to find new homes now.