Rehomed pony proves herself ahead of Christmas by winning her first competition! 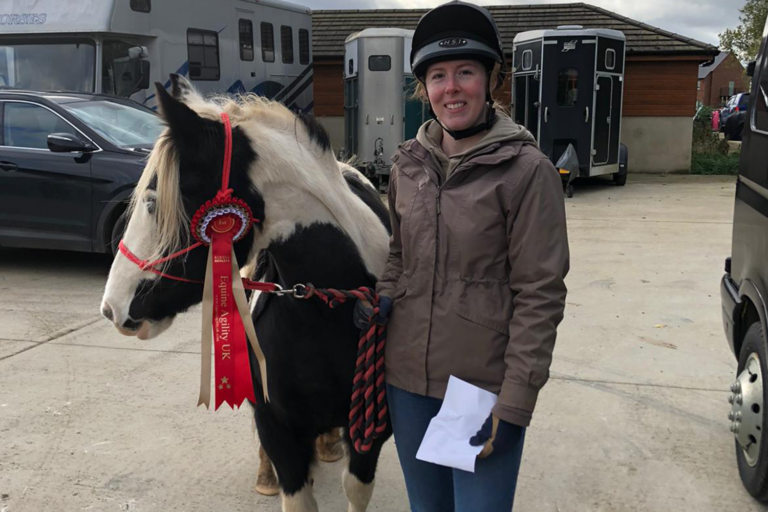 Festively-named little Cranberry, a 7–year-old piebald pony, has proved herself to be a real Christmas Cracker by excelling in her first competition with her rehomer!

Cranberry arrived, along with several other ponies, at our Hall Farm Rescue and Rehoming Centre in December 2018 after being removed from a site where they were likely to suffer, after at least one other horse had died due to complications from a large parasite burden. All the ponies were unhandled and, being close to Christmas, all were given festive names. After careful rehabilitation to make sure she was fully healthy and used to being handled, Cranberry was ready for rehoming.

In August 2018, Robyn Bills was looking to rehome a pony to keep her older mare company. Robyn said: “We chose World Horse Welfare to rehome from as you were the charity that stood out. The preparation that goes into these horses and ponies before rehoming is incredible. When we went to view her she came to us in the field and we just got that feeling she was the one for us. Cranberry loaded and travelled impeccably all because of the training she underwent with the World Horse Welfare team. Cranberry settled in really well and is the sweetest, most honest pony we’ve come across – we love her endlessly.”

Robyn rehomed Cranberry as an unbroken project pony with a view to backing her to do hacking and general fun rides. She was backed this summer and will be turned away over the winter whilst a plan is put together to get her restarted in spring to begin her ridden career.

Robyn said: “I found agility was just another opportunity for us to spend time together. I thought it would be something helpful for Cranberry and a chance to get her out and about mixing with other ponies. I never thought she would take to it so well! Hopefully it’s a step to helping her become a fully ridden, happy pony in the future, but she and I had great fun and I’m so proud of her coming first!”

Rehoming a horse is an immensely rewarding experience. Most of the rehomed horses have had difficult lives before coming into the charity and rehoming offers them a vital second chance, as well as making space in the farms for more horses that desperately need help to be taken in. Visit our rehoming site here.