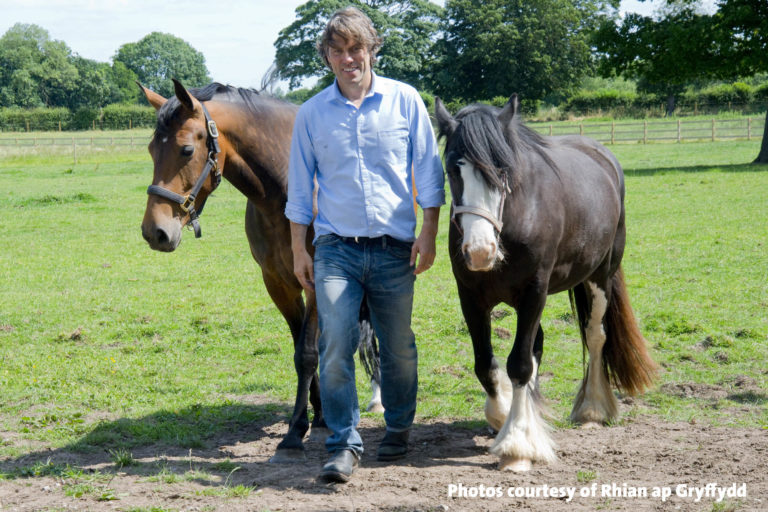 All of our horses are treated like super-stars by us but thankfully they don’t get star struck since four have been rehomed to award-winning comedian John Bishop and his wife Melanie, who are supporting World Horse Welfare’s ‘Rehome a Horse Month’ this September.

World Horse Welfare Dora, Amara, Indie and Mable have settled in perfectly with John and Melanie’s menagerie of rescue pets – which includes two English Bull Terriers Bilko and Tigger as well as their rehomed pot-bellied pig, Milo – at their home in the north of England.

“Melanie and I share a love of animals of all shapes and sizes and foster the belief that there are so many animals who have been neglected or abused that rehoming is the only logical option. It makes no sense to us why anyone would breed foals, puppies or even goldfish when there are so many deserving animals who need good homes.”

Melanie says that the horses are already part of the family:

“Rehoming through World Horse Welfare was so easy – the team at Penny Farm Rescue and Rehoming Centre have been flexible and helped us every step of the way. We are delighted that they were able to match us with four horses who perfectly suit what we were looking for.”

The Bishops join other rehomers such as HRH The Princess Royal, who rehomed World Horse Welfare Annie in 2013.

Melanie, who has been around horses for most of her life, says:

“The plan wasn’t originally to have four, but the little herd we rehomed now feel they like they belong together.”

Penny Farm Rescue and Rehoming Centre Groom Hayley Penrice explained why the four were the perfect match for the Bishop family:

“Melanie and John initially rehomed Dora who came to us extremely underweight and Amara – a beautiful mare who had also suffered from terrible neglect.  It’s likely that Amara spent her early years fighting for the little food available and as a result she has a very strong personality. Melanie felt that both Dora and Amara would benefit from another couple of horses to change the dynamics.”

Hayley agreed that Dora – in true celebrity style – could do with a bodyguard! So beautiful Piebald mare Indie – who won’t be pushed around by anyone – was also rehomed to keep Amara’s diva tendencies in check.  Little filly Mable joined the trio as the perfect playmate for gorgeous Dora. Melanie has a brilliant blend of patience and experience to give the four horses the home they deserve:

“Amara had a really tough start in life so it’s great to see that she still has the confidence to throw her weight around a bit.”

John added: “I would encourage anyone who is in a position to have any animal to look at rehoming before buying.  Growing up I never thought I would have a field full of horses, but owning them isn’t rocket science – you just need a bit of common sense and a good sense of humour. They’re strong-willed, unpredictable and impulsive so it’s a lot like bringing up children.”

Melanie loves to hack out but with three growing sons, her family of animals to care for and John’s busy schedule she rarely has the opportunity. Indie’s conformation means that she can’t manage much more than occasional hacks at walk and trot, but she is a lovely pony to ride and promises to give Melanie exactly what she is looking for.

Our Deputy Chief Executive Tony Tyler says, just as with all of our rehomers, the charity is extremely grateful to the Bishops:

“We need more rehomers just like Melanie and John.  World Horse Welfare has so many wonderful horses and ponies in need of good homes, and there are so many advantages to rehoming over buying.  Melanie has approached the whole experience with a very open mind and a great sense of humour which means four of our once-abused horses have a wonderful future ahead of them. It’s particularly lovely when we can rehome our horses together, especially to a family who are such strong advocates for rehoming once-abused animals.”

Once a rescue horse from a sad background, Major, the Highland Pony, now lives a life of luxury on the shores of Loch Ness, in Scotland – and occasionally he likes to walk through the Loch Ness waters.