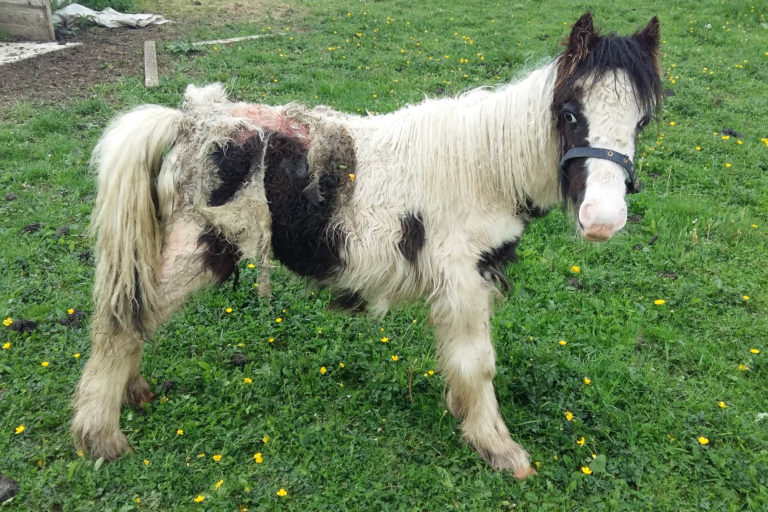 World Horse Welfare and the RSPCA are calling for information after a young pony was found with his skin being eaten alive by a maggot infestation which had developed from untreated wounds on his back and rump as a result of lice.

‘Buggy’ as he has now been named, was discovered in a field in the Hillam area of West Yorkshire with three other horses by a member of the public who immediately contacted the charity when she realised he needed urgent help. World Horse Welfare Field Officer, Sarah Tucker, arrived soon after. She describes what she saw:

“As I walked over to the pony, the smell was absolutely putrid even from six feet away. I could hear the maggots making a ‘crackling’ sound as they burrowed through his skin. It was like his skin was moving as he was so covered in them and he understandably looked very uncomfortable and dejected.”

“A vet from Minster Veterinary Practice in York arrived with RSPCA Inspector, Claire Mitchell, and the local police so that Buggy could be removed under the Animal Welfare Act and transported to safety. Given that Buggy was in such a terrible state, he was travelled to the Minster Equine Veterinary Clinic in York where he was put on a drip and received urgent treatment to clear his skin of the maggots. Vet Kathryn Wright BVetMed MRCVS said:

“The foal was very thin and was suffering with extensive skin damage due to maggot infestation as well as lice and intestinal worms. He was in need of urgent veterinary attention.”

“I would say this is one of the most horrific cases of neglect that I’ve seen in the years I’ve worked for World Horse Welfare. It’s shocking to think that Buggy has been left in this terrible condition for and that if he’d been found just one or two days later it would have been too late.

“In addition to Buggy’s awful maggot-infested wounds, the whole field was full of ragwort, all four of the horses’ hooves were in serious need of trimming and there was no fresh water supply for them to drink. Thankfully, they are now all in the safety of World Horse Welfare’s Penny Farm Rescue and Rehoming Centre in Lancashire and Buggy is on the road to recovery.”

“Poor Buggy was in a sorry state when we were called out to him, we’re really glad he is now receiving the care and treatment he desperately needs. His skin condition is absolutely appalling and he will have been extremely uncomfortable, it’s shocking that somebody could have left him to suffer like this.

“This is another great example of the successful multi-agency work between the equine charities to combat horse welfare issues, and I’m pleased that together we were able to ensure the welfare of these horses. The team at World Horse Welfare does a great job in rehabilitating horses like Buggy, and like us at the RSPCA, sees cases of neglect like this all too often.

“We’d be very keen to hear from anybody with any information as to who owns the horses. They can leave me a message in complete confidence by calling 0300 123 8018.”

World Horse Welfare today releases perhaps our most hard-hitting film to date showing the tragic story of a mare called Rhoswyn and our efforts to help her.