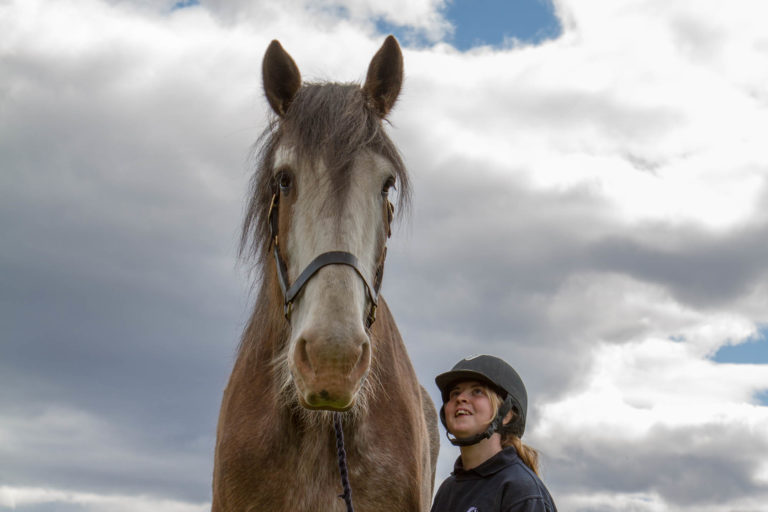 One of Europe’s tallest horses and much-loved adoption horse, 19hh World Horse Welfare Digger has been put to sleep due to ongoing health problems.

Digger arrived at World Horse Welfare’s Belwade Farm Rescue and Rehoming Centre as a four-year-old in 2007 after his owner contacted World Horse Welfare to ask for help. He was growing fast and at such a young age, problems had started to occur with the joints in his hind legs. After extensive rehabilitation from World Horse Welfare and gentle veterinary care, Digger regained confidence and continued growing – earning his title as the biggest horse the charity has ever cared for.

Standing at an enormous 9 feet from the ground to the tips of his ears and weighing almost a tonne, Digger caught the attention of The Household Cavalry Mounted Regiment and was accepted on a two-year training programme to become a drum horse, taking part in preparations for the Royal Wedding and Major General Parades. Unfortunately, it became apparent that Digger was much better suited to life in the slow lane away from busy London, so he returned to the Scottish Highlands in 2012 where he became Belwade Farm’s adoption horse.

Over the last few months, Digger had been struggling with recurring abscesses and more recently, his demeanour had become increasingly subdued and withdrawn which was a marked change from the inquisitive, friendly personality that he was known to be. Often a significant change in demeanour like this can be a sign that a horse isn’t feeling right in himself and in Digger’s case the team felt his quality of life had very much deteriorated as a result of the health problems he had been experiencing.

Digger received the very best care from World Horse Welfare’s vet and farrier, but sadly his condition showed no signs of improving and so it was with a heavy heart that the whole team decided it was in Digger’s best interest to put him to sleep.

“Digger was not only an amazing personality, loved by everyone who knew him but also a fantastic ambassador the charity. Despite losing his mother at just a few weeks old and battling a number of problems due to his extraordinary size, Digger led an inspiring life.

“He was the most loveable character who always enjoyed greeting visitors from far and wide, being careful and gentle with everyone – young and old, humans and horses alike.

“Digger captured the hearts of so many people from not only the UK but around the world. He will be sadly missed by each and every one of us here at World Horse Welfare.”

Penny Farm's Adoption Horse Magpie will be greatly missed by all at World Horse Welfare.

The team at our Hall Farm Rescue and Rehoming Centre welcomed Esme for a visit recently.