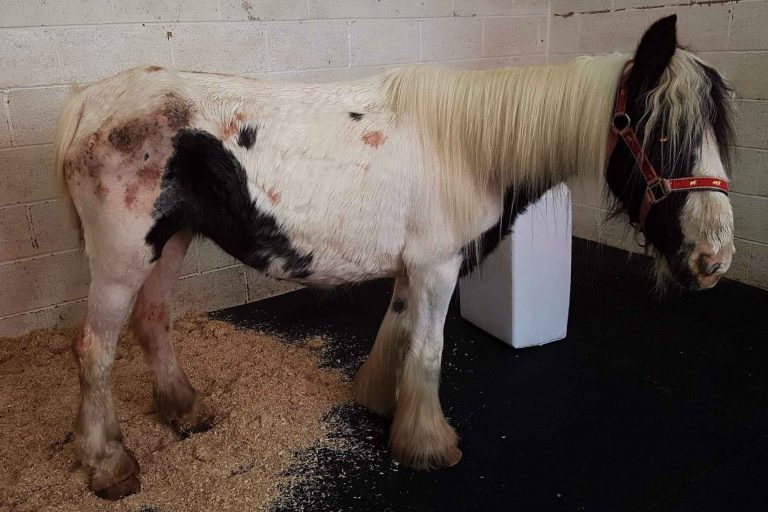 Buttercup came into our care in June 2018 in a dreadful state. She was so emaciated that she was covered in sores where her protruding bones had rubbed as she lay on the ground. Incredibly, shortly after she arrived at the holding yard Buttercup gave birth to a foal, later named Frieda.

Buttercup was so weak that she couldn’t care for her foal and the decision was made to move them both to World Horse Welfare Penny Farm Rescue and Rehoming Centre, so they could receive specialist round-the-clock care. Frieda was hand-reared by the dedicated Penny Farm team and thrived in their care.

Being so weak and emaciated, Buttercup had to have a very careful feeding regime to begin building up her strength. Initially she was fed four times a day, until eventually she was strong enough to go out in a paddock for a few hours at a time and then she began to gain condition slowly but surely.

“When Buttercup first arrived she stood in the stable with her head hung low, with her spine and hip bones protruding. She had sores on both sides, where she had struggled to get up. She was so weak that she didn’t take an interest in anything.

“Once she was eventually strong enough we started doing some in-hand exercise with her. We realised she might do very well at in-hand showing and she actually went to Equifest last year. They have special rescue classes, which are judged on the horse or pony’s previous history, their transformation and their performance. Buttercup was very well-behaved and she was crowned champion, so we’re very proud of her!”

Following on from her showing success at Equifest, Buttercup has been the star of many “Groom a pony” sessions at Penny Farm. She’s wonderful with children and loves being groomed and fussed over. Although she can’t be ridden, Buttercup is now ready to be rehomed as a non-ridden companion and is sure to become a much-loved family member, whoever her lucky rehomer is.

If you think Buttercup could be the perfect addition to your horsey family, why not check out our rehoming pages now?

RSPCA and World Horse Welfare alerted after concerns were raised for three equines kept at a stable yard.