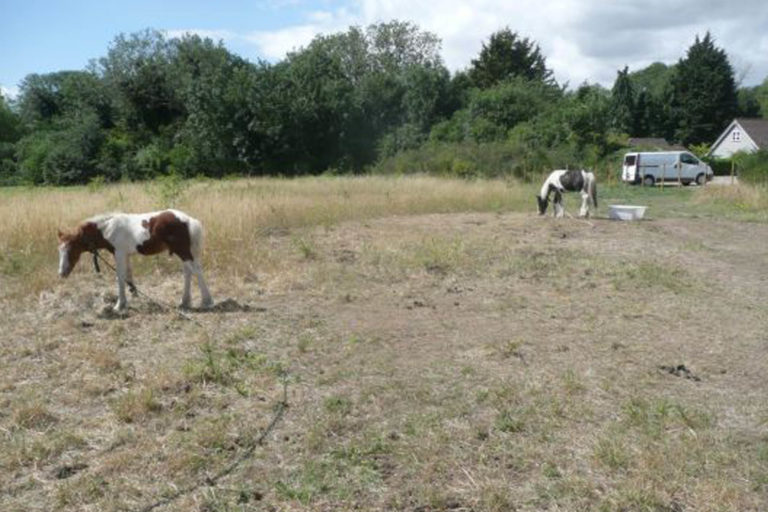 Over a year since the Control of Horses Act came into force in England, the latest figures show a reduction in the numbers of horses fly-grazed across England and Wales, with many case studies proving its effectiveness at tackling a problem which has been a cause of significant horse welfare problems, and blighted local communities, for years.

The most recent statistics show that there are estimated to be 3,000 – 3,500 horses currently fly-grazed across England and Wales, the same number as were estimated to be fly-grazed in England alone in 2014. This is strong evidence that the Act is having a real impact, providing another vital tool in tackling the welfare problems facing the UK’s horses. However, the coalition of welfare and rural organisations which campaigned for the Act (including Blue Cross, British Horse Society, CLA, Countryside Alliance, HorseWorld, NFU, Redwings Horse Sanctuary, RSPCA and World Horse Welfare) want to highlight the important role that awareness plays in ensuring the Act is used to its full potential.

Where the Act is being used it has been effective not only in enabling the swift removal of both large and small groups of fly-grazed horses – safeguarding their welfare and the surrounding local communities – but also, by taking robust action, locations which have previously experienced recurrent problems with fly-grazing have been able to eradicate the practice. In contrast, areas where the new law is not being used are now seeing more fly-grazed horses, perhaps due to the fact that owners can be assured they will face no consequences as a result.

“As a coalition we campaigned for almost three years for tougher legislation to tackle fly-grazing which blights local communities and puts thousands of horses’ lives at risk every year so it is encouraging to see positive results reported in the fourteen months since the Control of Horses Act came into force.

“We do believe, however, that there is still more work to be done. Awareness of the Act, and the willingness of more local authorities and other landowners to use it are key to its success in tackling fly-grazing, which is just one driver of the UK’s current horse crisis.”

The Control of Horses Act 2015, which came into force in May 2015, gives greater power to public and private landowners to remove horses being grazed on their land without permission and is an important step in tackling the UK horse crisis. Under the Act, horses can now be removed immediately rather than waiting two weeks and after just four days ownership is assumed by the landowner. The Act also opens up more options to dispose of the horses besides public sale, such as gifting them to a charity, selling them privately or humane euthanasia.

“The introduction of this new law was an important change for the countryside, and now the challenge is to ensure it is widely and consistently enforced. Fly-grazed horses can damage land, crops and fencing, restrict space for livestock and cost money to provide for their welfare and safety. Thanks to the Control of Horses Act farmers and landowners can act for swift resolution by, for example, rehoming the horses to charities or privately. In areas where fly-grazing continues to be a problem, local authorities and police forces must now begin working together to enforce the Act and support the local community in eradicating the problem.”

“Landowners and local authorities are the only ones with powers under the Act and they have a responsibility to use it as one of the tools available in helping to further reduce the still large numbers of fly-grazed horses across the country. This appalling practice will simply continue and even worse, increase, if there are no consequences for these irresponsible horse owners who put their horses’ welfare at risk by leaving them to fend for themselves on someone else’s land.”

Warwickshire Police and West Mercia Police are the first to establish a multi-agency approach to tackling the dangers of loose horses on roads across Herefordshire, Shropshire, Telford & Wrekin, Warwickshire and Worcestershire which not only create a direct risk to local communities but which are also a huge drain on police resources. The group, which includes local authorities, Trading Standards, the RSPCA, World Horse Welfare, British Horse Society and Defra identified fly-grazing as a root cause and contributor to loose horses on the roads and applied for funding from the Warwickshire and West Mercia Police Crime Commissioner’s Rural, Business and Cyber Crime Scheme.

The funding has been used to improve the speed of recovery for loose horses and develop a protocol for dealing with the horses using both the Highways Act and Control of Horses Act. The group brought in the use of bailiffs to ‘hold’ horses prior to an owner coming forward and to rehome them should no owner come forward. This successful approach to tackling the problem has significantly sped up response times, in most cases seeing horses safely caught and removed within one hour, freeing up police resources and reducing incidents by a third.

“When dealing with fly-grazing and loose horses on the roads we quickly identified these situations required the resources and powers of more than just one agency, resulting in us seeking collaboration with various agencies working together to employ the respective legislation each has available to them. Whilst loose horses create a direct risk to the public and animal welfare, the objective of the group is to address the root causes such as fly-grazing and irresponsible behaviour by keepers and owners of horses through education and enforcement. We have already seen notable success through this collaborative approach and would highly recommend this strategy to others in tackling fly-grazing and its associated problems.”

The Control of Horses Bill, proposed by Julian Sturdy MP for York Outer, was passed in March 2015, following almost three years of campaigning from a coalition of welfare and rural organisations for tougher laws to address fly-grazing due to the significant problems the practice causes for both horses and people.

The coalition produced a guidance document which provides information about the Act and its use for landowners and local authorities. This can be downloaded from the National Equine Welfare Council website.