Fond farewell to Rehomed Horse of the Year 2019 Supreme Champion

A fond farewell has been said to Rehomed Horse of the Year 2019 Supreme Champion and family friend Ru after more than 25 years together. 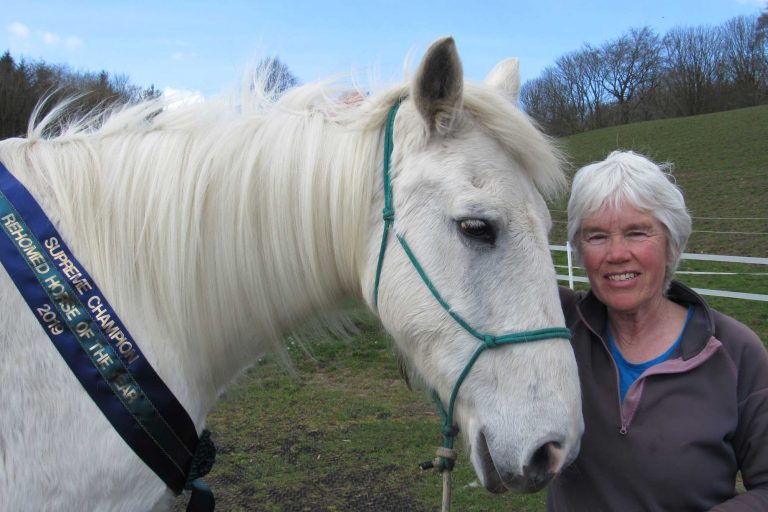 World Horse Welfare Windy (known as Ruith – or Ru for short – to his rehomer) was crowned as Supreme Champion of World Horse Welfare’s 2019 Rehomed Horse of the Year competition earlier this spring after being chosen by showjumper Joe Stockdale. Joe chose Ru over the other category winners due to the incredible and long-term bond he had with his rehomer.

Joe picked up on the fact that Ru had spent his whole life with one rehomer, saying:

“23 years with one family is just incredible. What a lucky horse to have found such a lovely family. I think the story says it all. He’s clearly been a huge part of their lives for the last quarter of a century.”

Ru and his rehomer, Jackie, received the Supreme Champion sash a few weeks ago and Ru wore it like a true champion. When Jackie entered Ru into the RHOTY competition he was already elderly and she wanted to enter to celebrate the amazing time they had had together. Sadly, Ru’s age recently caught up with him, and he was finding it increasingly hard to get up after lying down.

“Although we’d tried putting him on painkillers on the advice of our wonderful vets, he was still finding it a struggle and he showed that to me very clearly that morning. We were able to say goodbye to him, feeding him more polos than he’d ever seen in his life before, and it was very peaceful on a warm sunny day. I know this is a decision that we all absolutely dread, but I believe it’s part and parcel of caring for a horse. The last service we can do for them is making the end as peaceful, pain free and loving as possible.”

Jackie remembers that Ru’s mother had been rescued in poor condition from Wales and had foaled Ru in the World Horse Welfare centre. When they first met him, more than 25 years ago, Jackie and her young daughter had been considering rehoming a small pony suitable for driving but fell in love with Ru instead.

“It was fate. We were not looking for a bigger pony, and certainly not an unbroken project, but his calm aura won us over and he came to live with us. He was a dream to train to take a rider, and he and my daughter enjoyed many years of ridden fun together.”

Jackie started to ride him herself about 10 years ago once her own daughter grew up and left home. Eventually the time came for Jackie to hang up the saddle after Ru let her know that he was getting a bit stiff and no longer felt up to carrying a rider, so she began taking him out for daily walks in order to keep his arthritic joints moving.

“We walked along together, two old codgers side-by-side, with Ru occasionally nudging me with his nose, or stopping to scratch on a tree or nibble a leaf. It’s been a privilege to share and enrich his twilight years and try to repay some of the joy that he’s brought me over the years. It’s been so lovely to find that he’s touched so many people, and his story has resonated. The RHOTY has been a wonderful experience for us, thank you for all that you do.”

The 2019 Rehomed Horse of the Year competition featured three categories, Unbreakable Bond, In the Picture and I Wasn’t Expecting That! with each focusing on a different aspect of the many talents and benefits that rehomed horses have to offer.

Ru was originally chosen as winner of the Unbreakable Bond category by Sara Cox, Radio 2 DJ and World Horse Welfare Patron. She said:

“Not only is it the longest relationship but I really loved how the friendship had evolved over the years – from a two-year-old who developed into a great horse for Jackie’s daughter to ride, then hacking pal and confidence-giver to Jackie herself before the two of them hung up the saddle to become walking chums and companions – the line “two old codgers side-by-side” really made me smile. It’s the dream really, to have a horse that grows with you and remains forever a much-loved and treasured member of the family and, to celebrate that, I think Jackie and Ru are very worthy winners.”

Anyone rehoming one of World Horse Welfare’s horses or ponies not only receives the full honest facts about the horse and a lifetime of support, but the rewards of knowing that they are giving that horse perhaps its first ever loving home – while making space for another vulnerable horse to receive the care it needs.

Interested in rehoming? Check out our rehoming pages to see all our horses and ponies ready to find new homes now.