From welfare case to war horse, Penny retires from The King’s Troop

World Horse Welfare's Penny Farm in Lancashire held its annual open day last weekend as Penny the King's Troop horse was handed back to the charity after 12 years of service in the Royal Horse Artillery. 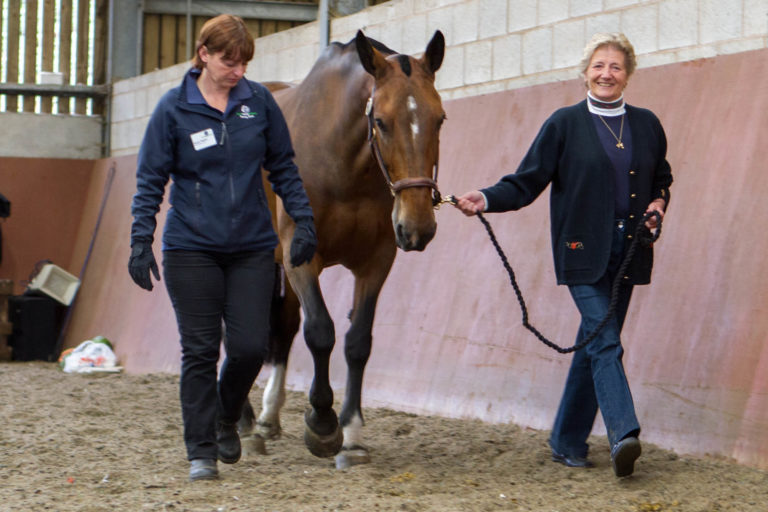 The highlight of the day was of course, Penny. She was handed back to World Horse Welfare by Captain Owen Beynon Brown of the King’s Troop. She was received by Penny Thornton, a trustee of the charity after whom the Blackpool farm – and Penny – are named.

“Penny has been a superb military working horse. Since arriving she has been given military training, a slightly different style of riding to civilian. She has had to adapt to all sorts of things that she wouldn’t have been used to, such as the different uniformed tack and a sword slung on her side.

“Ultimately, her job was as part of the gun team pulling one of the six WW1 guns that we have here at the regiment. In parades she would have been ‘on the wheel’ as a brake horse, we call them the wheelers, and given that she is a solid, chunky horse she fitted in there well.

“Since being with us, Penny has been involved in a whole host of parades, the first being the Queen Mother’s funeral. Thereafter she was involved in every parade we have done such as the Queen’s birthday, the Queen’s succession to the throne, jubilee celebrations and Prince Charles and the Duke’s birthday. More recently, she was part of the gun team that pulled one of the guns that fired the salute to mark the birth of Prince George.”

Penny was handed over to World Horse Welfare in full ceremonial dress with the soldiers. She was dismounted and her saddle and bridle were given back to the troop. Her World Horse Welfare head collar was put back on and she was lead back to her stables as Penny, not Hallmark, as she is known in the troop.

Penny is now an official resident at Penny Farm, where her rehabilitation began all those years ago after she was rescued as the first horse to be taken into Penny Farm. She was rescued as part of a group case from Yorkshire; she was emaciated, completely unhandled, had very bad feet and was covered in lice.

Now she is back fighting-fit after an admirable career in the service, an opportunity that not many rescue horses receive.

“Penny will now have some down time and we will turn her out in the field with the other ponies. She will then be assessed by our physiotherapist and vet in order to decide what her future will be. We are hopeful that she will be rehomed as a ridden horse.

“Penny going to the King’s Troop has shown that World Horse Welfare can take in an emaciated, poorly cared for horse and lead her on to do great things. Penny has been an ambassador for the charity and proves that rescued horses can go on to have a useful working career.”

The King’s Troop went on to show the crowd the work they do behind the scenes. Captain Brown said:

“Everyone sees the picture that’s on parade, but not the countless hours of lessons that the soldiers – and the horses – do to get to parade standard.”

Not just a day full of King’s Troop fun, Visitor Centre Officer for Penny Farm, Zoe Clifford picks out some highlights from the entertainment that day:

“The Atkinson Action horses stunt team were amazing. They were really breath-taking and performed with such energy. The crowd really enjoyed it.”

The stunt team provide highly trained horses to perform on TV, in films and at live events. Just some of the films they have starred in are: War Horse, the 2010 version of Robin Hood, Wuthering Heights and new release Snow White and the Huntsman starring Kristen Stewart, actress from the much-loved Twilight films.

Another popular feature of the day was the horse fancy dress show where members of the audience were asked to vote for their favourite. Zoe said:

“All the grooms at World Horse Welfare picked a fancy dress outfit for their horse. We had everything from Worzel Gummidge to buzzy bees, from disco divas to Dalmatians.”

Hannah Brown, and her bee, Jyster, were crowned the winners.

Despite the rain on the day, guests turned up in their hundreds and supported the charity, and Penny, in her ceremonial retirement.

When Haggis was found he was riddled with lice, grossly overweight and showing signs of laminitis, an extremely painful and sometimes fatal condition affecting horses’ hooves.