Once a rescue horse from a sad background, Major, the Highland Pony, now lives a life of luxury on the shores of Loch Ness, in Scotland – and occasionally he likes to walk through the Loch Ness waters. 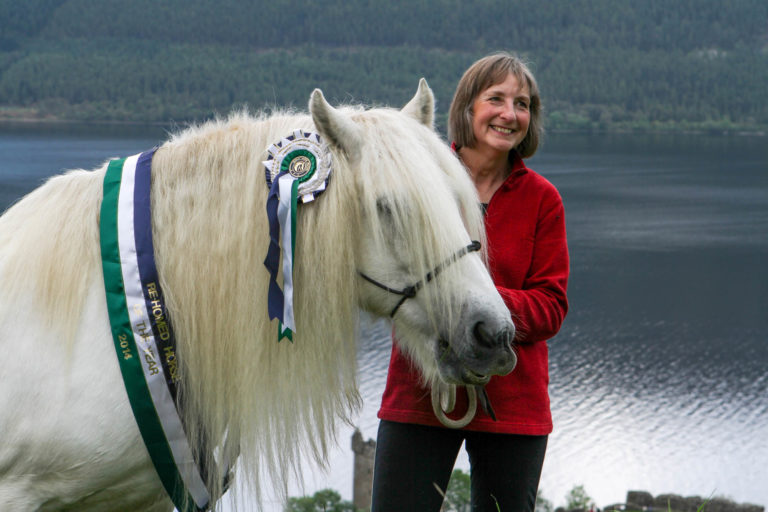 In 2006, Major was signed over to horse charity, World Horse Welfare, after he was found on an abandoned farm in Islay. He was taken to one of the charity’s four Rescue and Rehoming Centres, Belwade Farm in Aboyne, Scotland, and after rehabilitation with the charity, Major was ready to be rehomed.

In the same year, Janis Clark from Kilmore in Drumnadrochit (home of the Loch Ness Monster mystery) fell in love with Major on a visit to the charity’s centre. After finding out that she was a suitable rehomer she was thrilled that Major would now become her new ‘buddy’. He went to live in the most glorious of places in Scotland, right on the shores of Loch Ness and neither Janis nor Major ever looked back. Eight years later, in 2014, Janis decided to enter Major into World Horse Welfare’s Rehomed Horse of the Year competition and to her delight he won – and the charity got to tell their story.

“The place we like to go most of all is this tiny inlet bay on Loch Ness, he loves walking through it. On one occasion, with a friend of mine riding him, Major went quite far out – his head was poking out of the water and he looked as if he could have been the Loch Ness Monster! I’m sure lots of tourists have thought they’ve seen a monster at some point, but we haven’t seen one yet,”

Janis and Major spend much of their time hacking through the breath taking scenery of Scotland.

“Major likes nothing better than splashing through Loch Ness waters, especially on a hot day. He’s a real laid back character who really takes this characteristic to the extreme. On occasions members of the public have reported that a horse is lying dead in the outside school on the yard. Major likes to lie on the floor fast asleep  – and he often causes quite a furore. When horses from the riding school come down the track the first thing they see is Major lying flat out on the school surface and quite a few of them try to run back up the track. The horses are used to it now though and they know that’s just what Major does.”

Major has been involved in many activities to help raise money for charity. In 2013 he was chosen to carry a 90-year-old lady on her sponsored ride for the launch of Highland Equine and Riding Therapy (HEART), a charity which aims to support adults and children with disabilities or long-term illness to enjoy the therapeutic benefits of riding. He also participated in the worldwide non-stop riding lesson to raise money for well-known charity, Riding for the Disabled, and he always wears a purple and red poppy on Remembrance Day to remember the horses and humans who have died in wars.

This talented pony has also tasted success in the show world. He has been Working Pony Champion at the Black Isle Show and also Reserve Overall Champion at the North of Scotland Highland Pony Show.

Janis is so proud of her horse and the bond they share that she wanted to encourage others to rehome from World Horse Welfare.

“If someone was thinking about rehoming from World Horse Welfare I would say go for it. You get so much support and there are so many ponies that need a home, I would never go and buy one from a breeder.

“One of the reasons I entered the charity’s Rehomed Horse of the Year competition is because Major is such a good pony and I wanted him to be an ambassador for the charity. When people see him it might spur them on to think that they could go to World Horse Welfare and find something comparable rather than thinking that every rescue horse has a problem because, clearly, if you just look at my Major – he doesn’t have any problems at all. I’m very proud of him and I hope we live a very long and happy life together.”

You can rehome a horse from World Horse Welfare too.