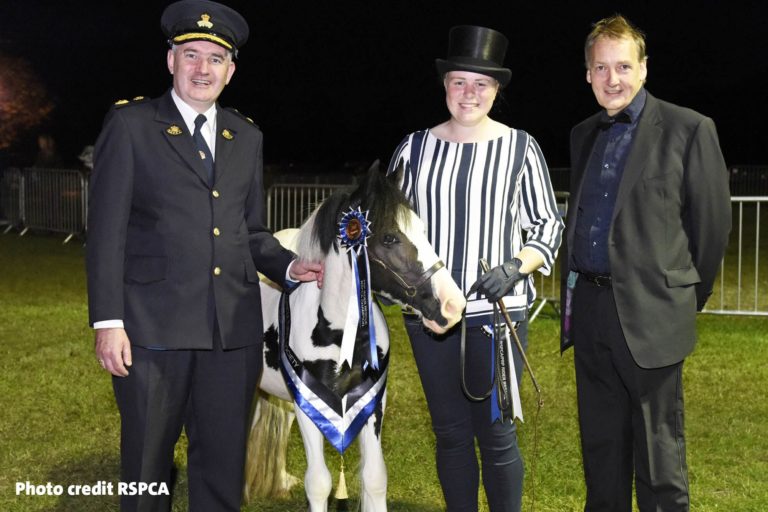 A young pony named Buggy who was discovered just over a year ago with terrible wounds on his back that had become infested with maggots has been crowned 2017 Champion at national event, Equifest.

Buggy’s inspirational story and transformation helped him achieve first place in one of his two classes at Equifest on Saturday and he then went on to the evening championship where he was awarded the title of PRP/RSPCA Rescue Pony Champion, presented by RSPCA Interim Chief Executive Michael Ward.

Buggy was discovered just over one year ago in a field near Hillam, Leeds, just a few months old and almost too weak to stand, with live maggots eating through deep wounds which had been left untreated on his back. Poor Buggy needed urgent veterinary attention before he was transported to the safety of World Horse Welfare’s Penny Farm Rescue and Rehoming Centre to undergo rehabilitation.

“We are all absolutely over the moon with Buggy’s championship and proud of what he and the other ponies have achieved at Equifest. Buggy’s story is a shining example of how a pony who has had such a terrible start in life can leave his past behind and go on to achieve amazing things.

“He’s such a sweet little character and is much-loved by everyone at World Horse Welfare, plus the many visitors who come to Penny Farm every week so I think it’s safe to say there will be many people celebrating his success!

“Buggy will soon be ready to find a new home on our Rehoming Scheme but as with all our horses and ponies, he will always remain in World Horse Welfare’s ownership safeguarding his welfare.”

Buggy’s story is a shining example of how a pony who has had such a terrible start in life can leave his past behind and go on to achieve amazing things.

“I am absolutely delighted that little Buggy was crowned the PRP/RSPCA Rescue Pony of the Year, he is a very deserving winner. The suffering Buggy endured before he was rescued is unthinkable, but to see him trotting around the prestigious Equifest arena with his sash and ribbons was very moving.

“The RSPCA and World Horse Welfare work very closely on horse rescues and together have tackled some of the country’s worst cases of neglect and suffering. Since our teams rescued Buggy together, the team at Penny Farm have done an incredible job rehabilitating him. It’s been very special for us all to see him shine at Equifest.”

“It was an honour to judge the rescue horse championship class, and while all the horses and ponies were a credit to their owners and the rescue teams, Buggy took our eye straight away. How horses are still being treated this cruelly today is beyond us. Buggy’s story was so incredibly powerful, and despite him still having the scars to show his ordeal, he is a super little pony and was a clear winner.

“These rescue ponies are just incredible and the work by the charities like the RSPCA and World Horse Welfare is fantastic. To think some of the ponies had never been handled before their rescue, let alone brought to a show. The atmosphere in that arena at Equifest is electric, yet you could see Buggy was simply smiling at life as he trotted around!

“It’s very challenging judging the rescue class: reading the ponies’ history is tough and seeing the photos is even tougher. You think of your own horses and how much you love and care for them, and it makes you realise that so many horses are just not that lucky. It’s very humbling.”

Violet was extremely thin, riddled with lice and heavily pregnant when she arrived at Hall Farm in March this year.

Donate during The Big Give Christmas Challenge and your gift will be doubled.