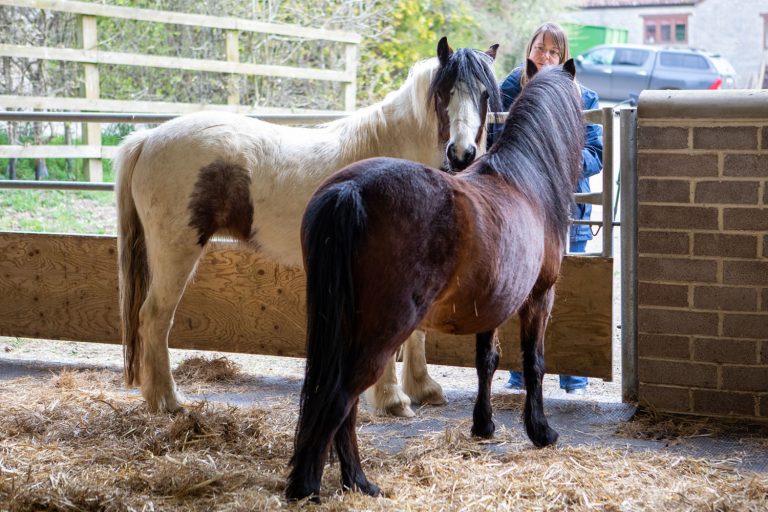 In late-February this year, two pony mares arrived at World Horse Welfare’s Glenda Spooner Farm Rescue and Rehoming Centre in Somerset, after being rescued from a small walled garden where both had been kept for many years. Their arrival marked the end of a complex rescue after numerous attempts by World Horse Welfare, other agencies and the local community to offer support to the ponies’ owner had been rejected. As concern over the ponies grew early this year, a piece of clever detective work by Penny Baker, Field Officer with World Horse Welfare, led to the breakthrough that meant the ponies could be removed from the site and taken to somewhere they could be looked after properly.

Mary and Poppins lived in a small walled urban garden which was “a dustbowl” in summer and “a mud bath” in winter. There was no grass to eat, the ponies could barely see over the wall and they never went out of the enclosure. They were, however, being provided with food and water by their owner and had a small shelter so their very basic needs for existence were being met meaning the charity, legally, had no immediate grounds to remove the ponies.

“In my 16 years of working on the welfare front I have never come across an owner who simply refuses to speak to me or enter into any communication with me. There was no way I could discuss the ponies’ situation with him, to work with him to improve their welfare and I knew the offers of help locals had offered over the years had similarly been rejected. This left us in a very difficult position, so we started doing some investigations.”

The ponies’ weights were increasing as they were unable to exercise sufficiently putting them at increased risk of ill health. It was believed that the walled garden belonged to the owner of the ponies but Penny decided to check, which she was able to do quickly and easily, and discovered that in fact the land was owned by someone else. Having contacted the landowners it became clear that they were worried about the ponies and had tried a number of different avenues to ensure that the owner removed them from the land, without success.

Penny informed them of the Control of Horses Act which enables a landowner to seize horses that are on their land without permission. The landowners placed the necessary notices and fulfilled other requirements of the act so that just four working days later – as the animals hadn’t been removed by the owner as requested – the landowners legally took ownership of them. The landowners were then able to sign the ponies over to World Horse Welfare and they were removed from the site and taken to Glenda Spooner Farm.

Beautiful bay 14-year-old Mary and 4-year-old skewbald Poppins can now enjoy the freedom, care and variety in their lives that they deserve. The long-term aim for them is to rehome them but before that they will need a period of intense care with the team at Glenda Spooner Farm to help them reach an ideal weight, ensure they are healthy and help them become used to the things that will be expected of them, such as being groomed, led and exercised.

The skilled and dedicated work the teams do at Glenda Spooner Farm, and the three other World Horse Welfare centres in Aberdeenshire, Lancashire and Norfolk for around 300 horses and ponies each year is not possible without public support. Even while the charity’s visitor centres were closed  last year due to the pandemic, staff at the centres continued to take in, care for and rehabilitate horses like Mary and Poppins.

“Please consider sponsoring one of the four stable yards at World Horse Welfare to enable us to give ponies like Mary and Poppins the best chance of finally being placed into a loving home for the rest of their lives. Your donations make such a difference.”

Now Mary and Poppins are getting used to life outside their small walled enclosure. Watching them explore and play in a paddock at Glenda Spooner Farm for the first time was an emotional moment for Penny and the World Horse Welfare team. If you’d like to help more ponies like Mary and Poppins you can sponsor the farm’s stableyard here.