Charity's World Horse Trail is launched, featuring 40 unique horse sculptures to be showcased around the country. 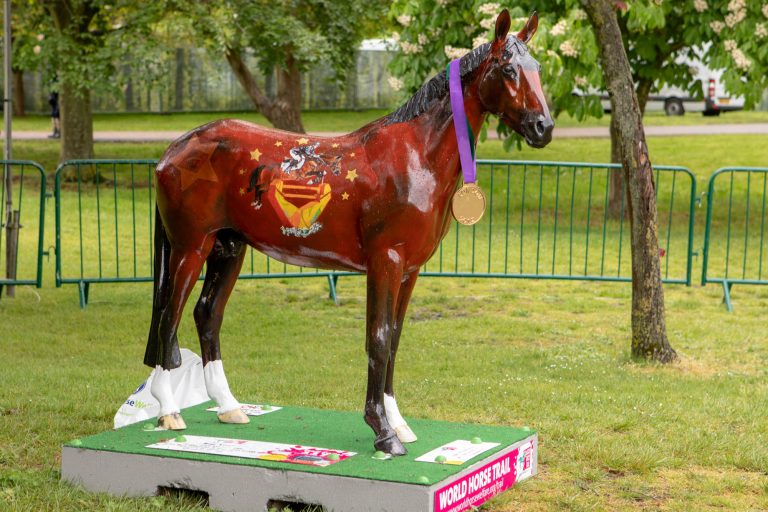 World Horse Welfare is set to launch three World Horse Trails in 2019 which will see 40 horse sculptures on display at a number of locations including the Royal Windsor Horse Show and across the charity’s four Rescue and Rehoming Centres.

Sculpted by acclaimed sculptor, Judy Boyt, the 40 horses will be a combination of 11hh sculptures and miniature maquettes standing at around 35cm high, with each one designed and painted by a leading artist, equestrian personality or celebrity. There was even an opportunity to submit your own design for one of the large sculptures in a competition that will be judged by World Horse Welfare Patron and former Olympic gymnast, Suzanne Dando-Reynolds. Entrants will be challenged to tell the story of youngster World Horse Welfare Hope through their design with the winning submission painted by a studio artist and going on display as part of the Borough Trail.

The muse for the sculptures is rehomed competition horse, World Horse Welfare Lucas, who was rescued as a yearling from a frozen field with his mother, both of whom were fighting to survive the harsh winter weather. Lucas is now transformed and regularly competes at British Eventing with his rehomer Colleen in Fife, Scotland. Judy travelled to meet Lucas and live-sculpt him late last year before creating an 11hh sculpture back home in her Wiltshire studio which was then used to create the mould for production of the fibreglass sculptures.

Ten of the 11hh sculptures will form the ‘Show Trail’ which will be displayed at the Royal Windsor Horse Show 8-12th May and will then travel to a number of other events through the summer. Ten 11hh horses will also make up the Borough Trail (locations to be announced) and then 20 miniature horse sculptures will feature across World Horse Welfare’s four Rescue and Rehoming Centres in Norfolk, Somerset, Lancashire and Aberdeenshire.

“Following the success of our 2016 Invisible Horse Trail, we wanted to create something even bigger this year as part of our Charity of the Year partnership with the Royal Windsor Horse Show but also as a way of sharing our work with a much wider audience. The horse sculptures are a fantastic visual way to show all the different aspects of how we help horses both in the UK and around the world, as well as celebrating some of the inspiring stories of rescued and rehomed equines.

“We’re delighted to be working with Judy Boyt again and so grateful to her and all the artists, celebrities and sponsors who are helping us with the sculpture trail this year – watch this space for more exciting announcements very soon!”

“Sculpting Lucas for the 2019 Trail has introduced me to another amazing horse that was rescued along with his mother by World Horse Welfare. I spent three days up in a rather cold but sunny Fife with Lucas and his rehomer, Colleen. I did a small maquette of him in wax, to use later for scaling up to the larger version, 1.20 m tall, made in clay ready for the moulders and casters to replicate the numbers for the new trail.

“He did inspect the sculpture while I went along, checking out his rather large ears! He was brilliant to work with, if rather laid back and asleep in his stable until he went out into the field and then it was gauntlets off and full steam ahead!”

Entries for the competition for those aged 16 and over to design a sculpture to tell the story of World Horse Welfare Hope were judged by Patron Suzanne Dando-Reynolds, with entries from under-16s being judged by YouTube star This Esme.