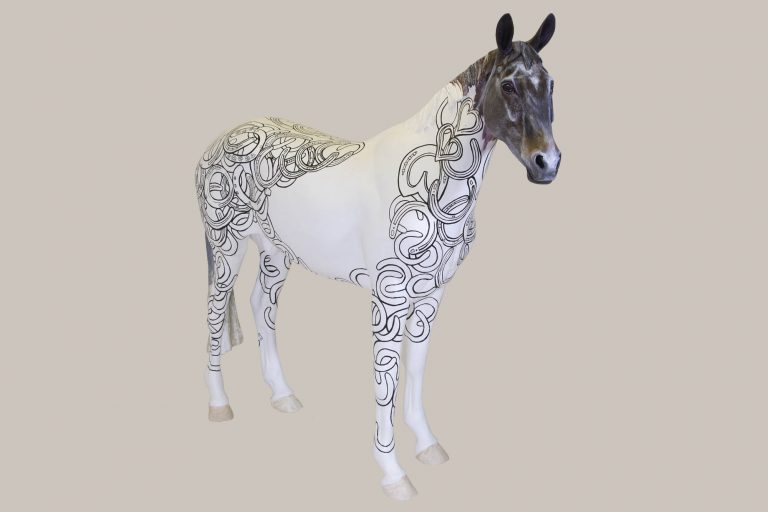 Following on from the success of the 2016 Invisible Horse Sculpture Trail at the Mitsubishi Motors Badminton Horse Trials, in 2019 we decided to create a 40 sculpture, multiple-location trail to highlight the positive stories of the horses helped by our work around the world.

The master sculpture itself was created by acclaimed artist Judy Boyt based on the story of Lucas, a frozen and abandoned foal who was rescued by World Horse Welfare and has flourished into a beautiful sport horse. You can also enter a free prize draw to win a beautiful maquette of India, Lucas’ mother.

The incredible sculptures will be auctioned off in November to raise funds to help horses and pre-bids can be made at the online World Horse Trail auction site now.

The World Horse Trail tells the stories of horses which we have helped as well as highlighting other areas of our work with horses in sport. A number of the sculptures feature working horses from countries like Haiti where families rely on their horses to make a living.

The unique designs for the sculptures were kindly created by artists, celebrities, students and members of the public and inspired by the stories or names of the horses. The World Horse Trail was proudly supported by the Beaverbrook Foundation.

Ten of the large sculptures featured on the Show Trail, which was launched at Royal Windsor Horse Show with much success before travelling to a number of other venues over the summer. The Borough Trail comprised a further ten large sculptures, which were first sited in the Royal Borough of Windsor and Eton, before moving to Kensington and Chelsea to be enjoyed by a new tourist audience.

The Farm Trail saw five mini-sculptures, or maquettes, featured at each of our four Rescue and Rehoming Centres around the UK. Four Haiti-inspired designs on the Farm Trail were the winners from a sculpture design competition for under-16s judged by YouTube sensation This Esme.

The winner for the sculpture design competition for those aged 16 and over was chosen by World Horse Welfare Patron and Olympic gymnast Suzanne Dando-Reynolds BEM.

“I am delighted to be judging the World Horse Welfare World Horse Trail competition. The 2016 trail was a huge success with some amazing designs on our sculptures. This is a fun and innovative way to help raise vital funds for the work we do at World Horse Welfare, not just here at home but throughout some of the poorest countries in the world. So, put your creative hat on, pick up that paint brush and help a horse in need today! Good luck.”

The trail artists were:

The sculptures were very kindly sponsored by: