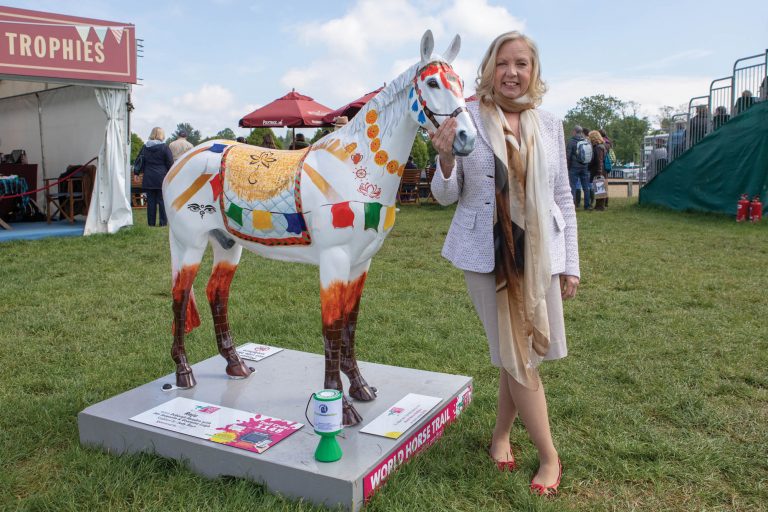 If you’ve been dreaming about getting your hands on one of World Horse Welfare’s World Horse Trail sculptures that have been on display around the UK this year, now’s your chance. The 41 stunning horses, many designed by celebrities, will be auctioned at Kensington Palace on 27th November 2019 and bids can be placed online now.

The sculptures, 20 large at 10.2hh and 21 small maquettes at just 3.4hh, highlight the positive stories of horses helped by the charity, directly or indirectly. They include designs created by famous names in equestrianism, broadcasting, art and design as well as competition winners and members of the World Horse Welfare team.

One of the auction showpieces is a stunning bronze maquette replica of Poppy the War Horse, a national monument unveiled in Ascot last year to pay tribute to the millions of UK, Allied and Commonwealth horses, mules and donkeys who gave service and sacrifice in World War One. It is one of a limited edition of just one hundred, crafted by the sculptor and artist Susan Leyland, and cast by Black Isle Bronze Foundry in Scotland. Maquette number one was gifted to HM The Queen and number 10 is on display at Downing Street. Others have been bought by collectors and celebrities across the world. All profits from the sale of edition 27 – chosen to recognise the year World Horse Welfare was established – will be given by War Horse Memorial in recognition of the charity’s pioneering work.

The sculptures were displayed at a number of equestrian and family events including the Royal Windsor Horse Show, Ascot Racecourse, Countryfile Live and the Gloucestershire Festival of Polo as well as the Royal Boroughs of Windsor and Eton, and Kensington and Chelsea while the maquettes were exhibited at the four World Horse Welfare Rescue and Rehoming Centres throughout the year and were a major hit with visitors for selfies!

Don’t miss your chance to own one of these incredible sculptures. Pre-bids can be made at the online World Horse Trail auction site now, until midnight on 20 November. The highest bids will go forward to the live auction at Kensington Palace on the evening of 27 November. Funds raised will support World Horse Welfare’s work in the UK and around the world.

For further information on the sculptures and to place your bid visit https://givergy.uk/worldhorsetrail

TV gardener Alan Titchmarsh has lent his support – and voice – to our Welfare Line Appeal.