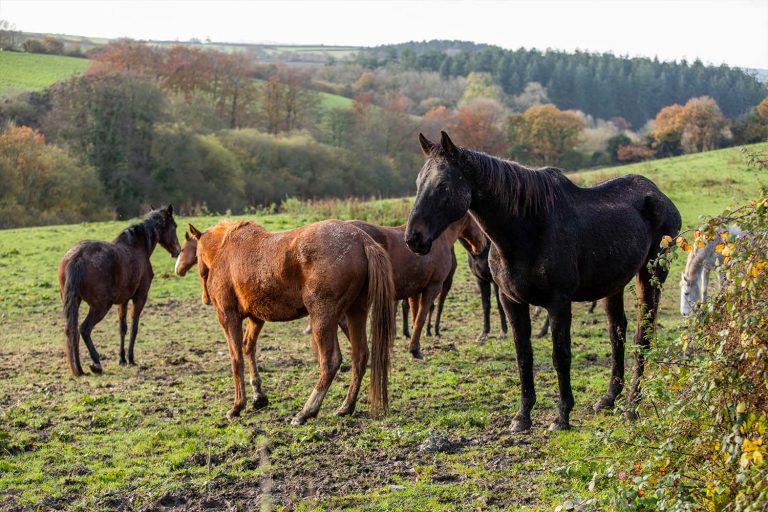 We’ve met our target – thank you all so much for your support! No further match funding is available but, if you’d like to, you can still donate to help horses in need here.

A herd of 15 Thoroughbred horses whose needs weren’t being met has been rescued from a site in Devon. The horses – which had been left at the farm following an eviction – were beginning to lose weight as winter approached but the landowner was able to use the Control of Horses Act, which allowed the horses to be signed over to World Horse Welfare and thankfully – despite many of the horses not being used to being handled – their round-up and removal to two World Horse Welfare Rescue and Rehoming Centres was relatively straightforward.

The costs for such an operation, however, are significant, and the horse’s removal is just the beginning of a lengthy and expensive process, with each horse being carefully looked after, assessed and rehabilitated by the charity for many months before, hopefully, being ready to rehome.

“I’ve been working with these horses for a number of months. They were all on the cusp, they were all lean and we didn’t want them to drop any more weight. If we didn’t remove them before winter proper, we were going to have a serious welfare issue.”

Hall Farm, Norfolk, received seven of the mares. After settling overnight following their journey, they all had their initial health checks, routine treatments and assessment by the team of experts at the farm.

“The mares will be turned away in a field until after Christmas now, which will give them the opportunity to decompress and settle into their new environment. During that time, we will be assessing their behaviour in the field with each other and the grooms.

“These Thoroughbreds are the lucky ones; they will receive five-star treatment from the day they arrive to the day we can hopefully find them a new home.

“We rely on public donations to allow us to continually rescue, rehabilitate and rehome horses that come in to our four farms from across the country. Without public donations our work would not be possible.”

We’ve met our target – thank you all so much for your support! No further match funding is available but, if you’d like to, you can still donate to help horses in need here.

By supporting World Horse Welfare between 30th November and 7th December 2021 as part of The Big Give #ChristmasChallenge21, every penny donated to the charity will be doubled (until the appeal target is reached) and will make a huge contribution to securing the future for these horses and others like them. One donation, twice the impact. Together we can.

Our new appeal aims to support a once-in-a-generation opportunity to stop horses suffering needlessly long journeys across Europe to slaughter.

The heart-wrenching ad tells the story of Barney, a plucky little pony determined to get help despite his terrible condition.