World Horse Welfare today releases perhaps our most hard-hitting film to date showing the tragic story of a mare called Rhoswyn and our efforts to help her. 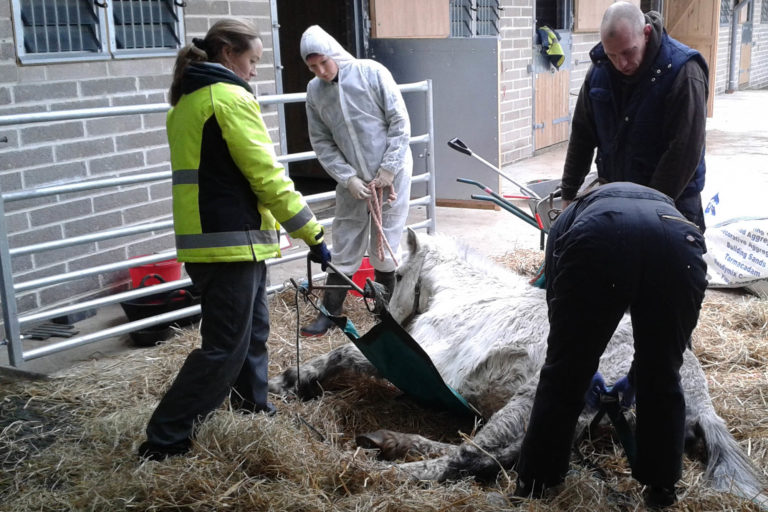 The film about Rhosywn’s story captures the realities faced by a dedicated team working on the front-line of horse welfare during the UK’s current horse crisis.

When experienced Field Officer Tony Evans was alerted to a group of horses on an exposed Welsh hillside he quickly gathered a team of professionals to get them to safety:

“Under veterinary advice we were able to move Rhoswyn and two youngsters but some of the group were just too weak and in such poor condition that the kindest thing to do was put them to sleep.  It is scandalous that the owner of these horses abandoned them giving them little chance of survival, with absolutely no regard for their welfare or the law, and was able to get away with it unpunished since there was no way of tracing them.”

The heart-breaking fate of beautiful Rhoswyn is accentuated by the fact that she was nursing her own foal – Orlagh – as well as an orphaned foal – Zoe.  In her emaciated state she was sustaining these two vulnerable fillies and in doing so literally sacrificing her own health to keep them alive in such an unforgiving environment.

Our Chief Executive Roly sums up why this film is so important:

“This seemed a very sad but appropriate opportunity to show people the terrible impact that this kind of irresponsible ownership has on horses, as well as the reality faced by our staff who work so hard to help these animals in desperate need.  We are often asked by supporters how we can face the worst possible kinds of equine abuse day-in-day-out when we all have a genuine love of horses. It is hugely distressing but thanks to our staff and supporters we can help these horses.  We can also press for change to try to reduce the chances of similar situations happening in the future – which is why we are pleased that now both England and Wales will have tougher laws to more quickly address fly-grazing.

“However these laws will be worthless unless they are used by landowners.  There are many responsible landowners and commoners who will take action when horses are left on their land, but there are still too many who will not, or cases like Rhoswyn’s where the horses are left in vast areas where they may not be spotted for some time.  Landowners do need to play their part but of course it is the owners that have primary responsibility. This is just one of many reasons why we need to introduce a robust system of equine identification so that the owners who abandon their animals to fend for themselves can be held accountable.

“This video is very upsetting but it is the stark reality of the current UK horse crisis.  Yes, we do get very emotional, even angry, at times.  But we use this feeling to drive us to do more, to help more horses, to educate more owners about their responsibilities and to provide more effective laws to help better protect our horses.  Our supporters are critical to achieving this impact and we hope this short film will encourage others to join us.  Together we really can make a huge difference.”

World Horse Welfare Orlagh and World Horse Welfare Zoe are safely at Glenda Spooner Farm Rescue and Rehoming Centre in Somerset and making good progress. Centre Manager Claire Phillips says the two foals are a joy to have on the farm:

“Orlagh, who we believe to be just six months old, has made friends with another filly – 10-month-old Crystal – who is playing the perfect big sister role. They play beautifully in the paddock and come in for a mid-morning “baby nap”, snuggling down together in one of our crew yards. They have developed a wonderful bond and Crystal has given Orlagh much-needed confidence. Zoe – the younger foal – is doing well too and the fresh spring grass is exactly what she needs to build up her strength. All being well Orlagh and Zoe will join other youngsters on our rehoming scheme later this year.”

Equine obesity is an increasing but under-recognised welfare issue in the UK.