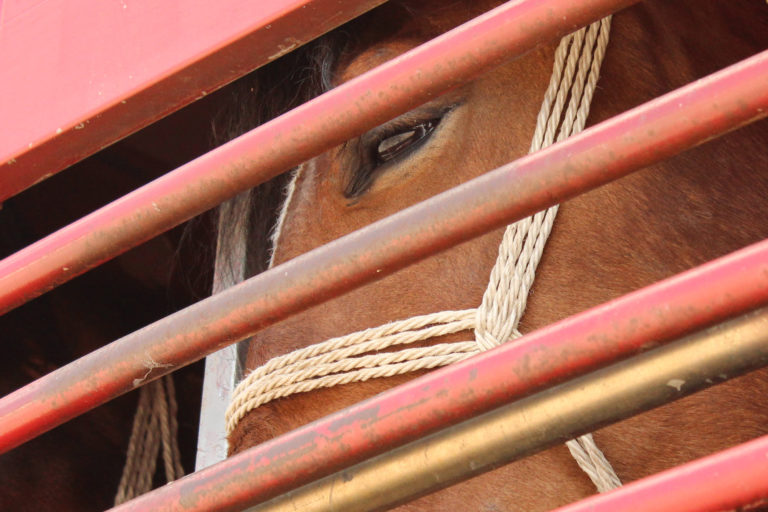 World Horse Welfare’s campaign to end the long-distance transportation of horses to slaughter in Europe has received a boost with the publication of recommendations from a panel of experts, which include a cap on journey times and improved welfare conditions for horses.

Scientists at the European Food Safety Authority (EFSA) have made a number of recommendations for improvements to current EU welfare legislation for horses and other animals during transport. EFSA’s findings will inform a report being produced by the European Commission on the current Regulation, due out in the autumn.

World Horse Welfare informed EFSA’s report by submitting evidence from its own research and field investigations. Many of the charity’s campaign priorities have been explored within the recommendations, including journey limits, space allowance, water provision and partition design, demonstrating the importance of the charity’s on-going scientific research.

Jo White, Director of Campaigns at World Horse Welfare, said that the recommendation for a 12 hour journey limit for horses destined for slaughter was extremely welcome.

“To have this introduced and then robustly enforced could bring an end to the stress, exhaustion and suffering the charity sees during investigations along Europe’s slaughter routes. We’re delighted that our evidence was referred to in the final report. We now call on the European Commission to work quickly towards the introduction of short, finite journey limits, which could end the single biggest abuse of horses in Europe.”

World Horse Welfare is also pleased to see the inclusion of other recommendations that would improve welfare conditions, many of which were put forward by the charity in its package of evidence. These include: providing water before and after the journey and continual access to an unrestricted supply of clean drinking water during the whole of any rest period, ensuring all horses are transported in individual partitions (with some exceptions) and undertaking research to improve the design of partitions. EFSA also recognises that space allowance needs to be tackled, which is a step in the right direction.

“We are very pleased EFSA has taken note of our evidence and developed recommendations that will improve the current situation. This not only shows the current Regulation does not go far enough, but that improvements are essential to horse welfare. Every year this is left unchanged, tens of thousands of horses suffer needlessly.”

You can read the EFSA Report here.