When Haggis was found he was riddled with lice, grossly overweight and showing signs of laminitis, an extremely painful and sometimes fatal condition affecting horses’ hooves. 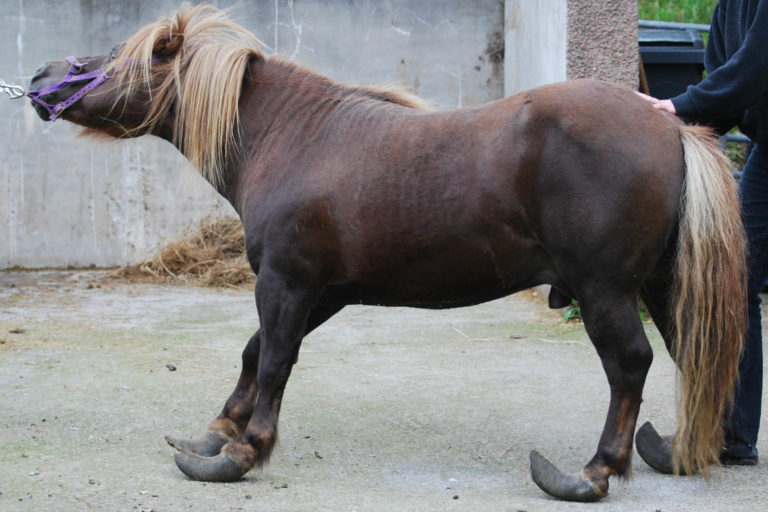 Haggis’ feet had been left untrimmed for so long that they had curled up and forced him to walk on his heels. As far as we could tell, he hadn’t walked properly for years.

Our farrier, Donald Nicol was witness to the neglect that the miniature Shetland had faced.

“His feet were curled right up with so much growth that he was walking right back on his heels. This forced him to roll his feet over onto the outside and made him twist his leg outwards, this put a great deal of pressure onto his legs, causing extreme soreness.

“It wasn’t just his feet that were affected; the problem meant that he had large muscle build up above his hocks because of the way he had to walk to compensate for having his feet so long. It caused him suffering all the way up his legs, via his tendons, ligaments and muscle structure; it puts a big strain on all of the components of the leg.

“Once I had trimmed back his feet, it still took him a long while to get used to walking normally again. His feet had probably never been trimmed, so we had to give him pain relief to help him get through that until he got better.”

Thanks to World Horse Welfare, he did get better and is now in a loving new home, but it still took time for him to trust humans again.

Haggis was one of the lucky ones, if you can call it that. He was found with two of his pony friends that had also suffered terribly. One was in such a bad state; he had to be put to sleep.

“He was grossly overweight, a body score condition of 4 and a half, with 5 being grossly obese; you could barely feel any ribs. We needed to manage his diet carefully, so that we could gradually get his weight down. We needed to avoid high risk laminitis.”

Since Haggis’s ordeal he has risen from rags to riches and met Her Royal Highness, The Princess Royal at our Belwade Farm with his rehomer Chloe McCutcheon from the Moray area, who had prepared him for his special day, where he would take part in a demonstration for the Princess.

“After looking at the rehoming horses on World Horse Welfare’s website, I immediately arranged to go up there to see them all. When I saw Haggis I fell in love with him straight away, he was the perfect companion.”

Haggis is now known as the nanny on Chloe’s yard and has even taken part in a sponsored walk for us to help raise money for more horses in our care and won a rosette at a show he attended.

Chloe is thrilled to have Haggis complete the family.

“Haggis has been a fantastic companion, they have so many benefits to your yard and just because they are a companion doesn’t mean to say that they’re not used. Haggis has a job, his job is to be a nanny when he needs to be, lead youngsters in and out of trailers – they are the general reliable type on the yard.

“I’d absolutely recommend rehoming a horse from World Horse Welfare. The staff were really helpful and the process was really easy from looking at their website to being invited to have a look at the horses and ponies in their care. The staff are very honest about the horse’s backstory and what might be right for you and you just tell them your requirements.”

Haggis’s original owner was prosecuted and banned from keeping animals for life.

Help other ponies or horses that have been through similar ordeals by giving one of our horses a home through our rehoming site.